Literature / Why Not Me? 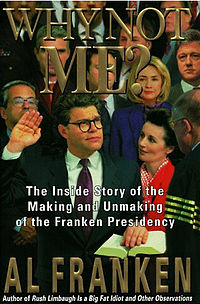 Why Not Me? The Inside Story of the Making and Unmaking of the Franken Presidency is a 1998 satirical novel by Al Franken about his fictional run for President of the United States in the 2000 election.
Advertisement:

In the story, former comedian Franken decides to run for president on a single-issue platform (abolishing ATM fees) and challenge the frontrunner and likely shoo-in, then-Vice President Al Gore, in the Democratic primary. Despite daunting odds, and disastrous P.R. stunts by Franken and his campaign staff, a combination of avarice and circumstance allows Franken to win in a Landslide Election. However, it soon becomes apparent after his inauguration that Franken is not up to the being leader of the free world...

While it was a farce at the time of publication, it later became Hilarious in Hindsight when the Real Life Franken embarked on a political career and became a U.S. senator from Minnesota. He actually got such a reputation that at least one pundit recommended him as Hillary Clinton's running mate

for 2016. Then it became Harsher in Hindsight when Franken was forced to resign in 2017 (for multiple allegations of sexual harassment, as opposed to manic episodes like in the book).