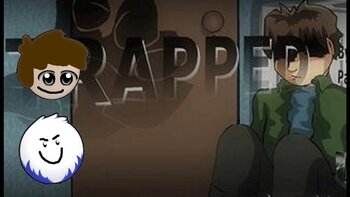 The Trapped Trilogy is an adventure game series by Patrick Majewski (Godlimations). It consists of three installments: Trapped, Pursuit and Escape.

Trapped focuses on an unnamed protagonist who wakes up afflicted with Easy Amnesia. Trapped in a bathroom, he tries to figure out who he is, where he is, and how to get out.

Pursuit shifts focus to Dialla Reineheart and her partner, Mickey Lee, as they attempt to pursue the Armor Gamsees, a notorious gang led by crime lord Dan McNeely.

Escape follows Dialla as she attempts to escape capture and put an end to everything once and for all.

Apparently, a fourth game, entitled Stranded, was in the works. This will shift focus back to Dan as he finds himself stranded on an island, with something evil lurking in the background.

The games are notable for having been featured on Retsupurae.

Not to be confused with the Trapped Series or the UK kids' game show which are similarly named.

This flash series provides examples of: