Have I Mentioned I Am Heterosexual Today? 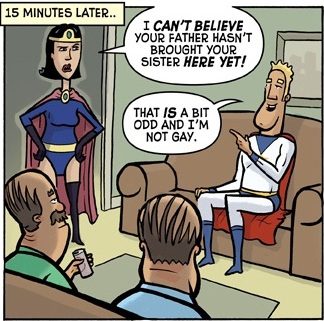 Girls: So what are you guys out doing today?
Joey: Oh we're not out! No, no, we're just two heterosexual guys hanging with the son of our other heterosexual friend doing the usual "straight guy" stuff.
Chandler: You done?
— Friends, "The One with the Baby on the Bus"note To be fair, they were mistaken for a gay couple in the previous scene
Advertisement:

Have I Mentioned I Am Heterosexual Today is a trope that takes place in a genre filled to the brim with Homoerotic Subtext. So, to compensate for this, every other line of dialogue comments on how some character is straight and their relationship with someone else is platonic. Every other cast member also comments on how this person is in fact in a totally normal-type relationship. Not That There's Anything Wrong with That, but they aren't.

This isn't just a story that turns someone straight or just takes a hardline on Ship Tease...this is a story where nobody will shut up about it, ever. Naturally, because of Suspiciously Specific Denial, many people will interpret this as a case of Transparent Closet whether the character is gay or not. As with similar tropes, like Most Definitely Not a Villain and Hugh Mann, many writers play this trope straight on purpose. Sometimes this Trope is connected with If It's You, It's Okay.

If they're not just trying to convince people which way they swing but that they swing at all, it's Have I Mentioned I Am Sexually Active Today?.

This trope sometimes accompanies various Gender-Blending Tropes (e.g., Wholesome Crossdresser) as a way of lampshading that the character does not conform to stereotypes like Trans Equals Gay, is not a Drag Queen, etc.

If a character achieves this through acting gay, that is Gay Bravado. Contrast Armoured Closet Gay when the person is both gay and homophobic. For a character constantly reminding everyone they are gay but getting into a lot of heterosexual situations (or no situations at all), see Have I Mentioned I Am Gay?.

Compare Not That Kind of Partner.

From the comments section... "Having never seen the movie, this is from I can only assume that this musical follows the story of a lonely lesbian girl who must deny her true passions while watching girls in leotards dance around the women's locker room singing about their heterosexuality."