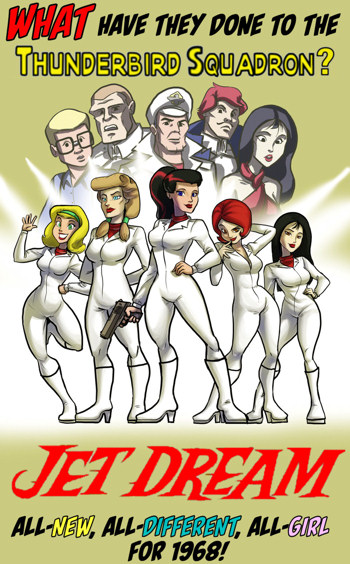 A house ad that appeared in several TG Comics titles in late 1967, and thus technically the first appearance of the "new" team. (L-R: Cookie Jarr, Marlene, Harmony Thunder, Petite, Ting)
"All-American boys, transformed by the wicked forces of Z.E.R.O. into fabulous females! Undaunted, the Thunderbirds fight on in newly Amazonian attire, as... the Fabulous T-Girls!"
— Jet Dream and Her T-Girl Counterspies #1

The original Gold Key Comics Jet Dream comic book stories provide the primary source material for the Jet Dream Remix Comic, also known as Jet Dream and Her T-Girl Counterspies. According to the fictional publishing history of the series, the characters were previously the stars of the long-running series Thunderbird Squadron. But in the (nonexistent) final issues of that series, the T-Birds were transformed into ''T-Girls'' by the biological super-weapon Virus-X.

The first issue of the Remix Comic depicts the T-Girls' efforts to find an antidote in time to save the population of Miami Beach and to reverse their own feminization. They succeed in the former but, of course, fail at the latter, and remain T-Girls for the entire series.

The T-Girls engage in a variety of espionage and paramilitary activities, operating under NATO supervision. Their organization, formally, is J.E.T. D.R.E.A.M. - The Joint Elite Team, Division of Raiding-Expert Aeronautical Maidens. Typically, however, the organization is referred to as simply "Jet Dream."

The members of Jet Dream, the Remix Comic, are:

To date, the above five are the only T-Girls, though indications are given that limited doses of a safe, modified version of Virus-X will be given to some of the most qualified members of the Jet Dream Auxiliary Services (all of whom work and live as women.)

According to the fictional publishing history of TG Comics, Cookie Jarr became the Breakout Character of the All-New, All-Female Jet Dream series. As a result, she gained her own solo title, It's Cookie!. Unlike the straight action-adventure of the main title, It's Cookie! was a "teen humor" title, focusing on Cookie's role as head of Jet Dream's "kid sister" organization, J.E.T. T.E.E.N. - Junior Echelon, Teen T-Girls, Elle-Boys, and Esprit-Girls (Natural!) While humorous in nature, these stories also had Cold War themes, focusing on the mostly-peaceful "Cool War" propaganda campaign between NATO and the Warsaw Pact to win over the world's teens with competing sex-change programs.

An additional title in TG Comics' fictional publishing history was My Jet Dream Romance, a romance comic centered around the romantic lives of both the T-Girls and Elle-Boys of the Jet Dream Auxiliary.