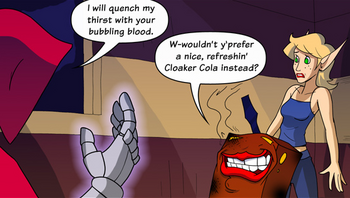 Bugs Bunny: Is this [Wal-Mart] a mirage? Or just product placement?
Daffy Duck: Hey, who cares? With shopping convenience at such low prices!
— Looney Tunes: Back in Action
Advertisement:

Product Placement is a fixture in media, for good or ill. Like any pervasive concept, especially one that is criticized so often, writers love to play with it. The result is Parody Product Placement, which can take several forms:

Obviously, these aren't the only ways to accomplish the trope, but all share an essential aspect: poking fun at product placement.