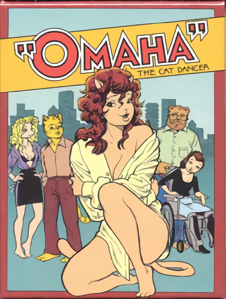 A sexually explicit Soap Opera about a feline stripper and her friends told with a sex-positive feminist point of view. The series started in 1978. The artist throughout the series has been Reed Waller, with the writing handled for the most part by Kate Worley until her death in 2004.

The titular character is a Cat Folk girl in her early 20s working as an ecdysiast... an exotic dancer, in the fictional town of Mipple City. Her boyfriend Chuck works as an artist and nominally supports her dancing career. After posing for a men's magazine centerfold, Omaha gets invited to a shady dance performance that results in Omaha and Chuck being dragged into a byzantine plot between various power brokers that includes Chuck's father Charles Tabey Sr. - one of the wealthiest and most powerful men in the state. While dealing with the external political plots, the whole cast of characters also have to cope with complex emotional issues that can shatter their lives.

Once parodied by Robert Crumb in "Wichita the Rat Dancer".