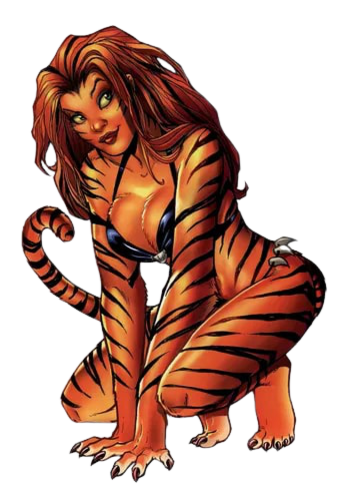 Can't take my eye off the tiger.
When it comes to animal symbolism, a major association of felines is with sex. Any feline-themed character is likely to be very sexually attractive and probably the most sexualized character in the work. This can range from actual Funny Animal cats, to characters who are to some degree feline-human hybrids or shifters, to alien or fantasy Cat Folk, to entirely human characters who have a cat theme. Because Most Writers Are Male, this usually applies to female characters, although there are male examples.
Advertisement:

It's easy to see why: Cat ownership and feline traits have been historically associated with women (although in Real Life an equal number of men and women own cats). Many things men found attractive in women were projected onto cats. They are viewed as graceful, gymnastic and flexible; they have a mercurial temperament; if they aren't neutered they make it obvious to everyone around when they're in heat, and even when not in heat, they have no shame in their love of being petted and stroked. It can't be a coincidence that "sex kitten" rapidly became a term for female sex symbols. note  Big cats such as tigers and lions, however, are seen as masculine felines instead due to their stocky builds and powerful muscles. They are thus associated more often with Hunks or Amazonian Beauties.

Note that for this to be the case, the character's sexiness and feline associations must both be unusual within the work — if a work has a cast made up mostly of anthropomorphic cats, don't add the sexy one.

There is a very strong overlap with Classy Cat-Burglar. See also Cat Girl, although they vary in their degree of sexualisation, with some being platonically "cute". Compare to Cool Cat.

See also Foxy Vixen for this trope's canid counterpart, as well a Snakes Are Sexy and Seductive Spider.