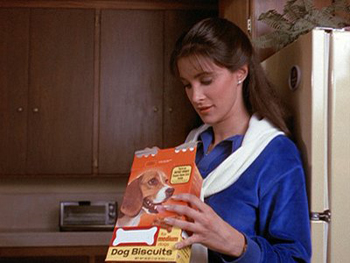 The old fashioned way.
Companies pay big bucks for Product Placement, and popular media certainly appreciate the value of this cash cow. So much so that when products or corporate logos turn up incidentally in TV programming without having paid the requisite dues, they will be censored.
Advertisement:

This mostly occurs in non-fiction programming, like News Broadcasts and Documentaries, where the producer has little control over the people and the environment, or Reality Shows. If an interviewee for a documentary is wearing a T-shirt with the Nike swoosh, break out the Pixellation. Before the development of digital image processing, stagehands handled this by covering labels on bottles, cans or boxes with masking tape or paper strips. This process, called "greeking," is still quite common, as masking tape is a lot cheaper than making the blurred area track the motion of the naughty brand name. Keep in mind, they did (and still do) "greek" clothing or other logos on people's shirts, too (often during spontaneous gonzo segments on nonfiction shows), and it's not very comfortable.

Additionally, old movies and TV shows bearing Vanity Plates with dated bylines might have these plastered over with the current studio logos in newer prints. Logo plastering can also occur if the rights to a movie or show pass on to a different studio.

Compare Writing Around Trademarks, Brand X and Bland-Name Product. Can also be considered a visual form of Smurfing if Pixellation or a Censor Box is used.