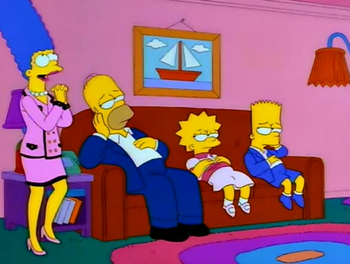 While the Simpsons visit Ogdenville's Outlet Mall to buy a new TV (that looks just like the old one, because Status Quo Is God), Marge finds a fancy Chanel suit and begins wearing it around the house and around town so she can feel like she's a rich housewife — and an old friend from high school sets out to make Marge's wish of being high-class come true by inviting her to a country club.