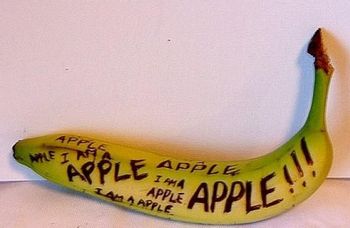 And yet it still remains uneaten by ravenous chimpanzees. The disguise must be working!
Duck: Juno, look in my eyes. Do you know when I'm pullin' a fib?
Juno: Yes, it's when you start stumbling over your words a whole lot and you say 'fuck' a bunch.
— The Adventure Zone: Amnesty

This page, if it were about Bad Liars, would say that sometimes, but never for comedic effect, a character is unable to lie in a convincing way and comes up with really silly lies that fool no one. It would not point out that children are especially prone to it, because once they get over their innocent inability they have little practice. It would not talk about physical tics that give away liars either. And it would especially never say that this is a reason why Keeping Secrets Sucks, because keeping secrets is cool. But this page ''isn't'' about Bad Liars, so it won't. Seriously.

This page is not related to Hurricane of Excuses or Suspiciously Specific Denial. Honest. And Inflationary Dialogue is definitely not a specific form of it.

Actually this is Consummate Liar. Yeah, yeah. That's the ticket.

Pinocchio does not say that this page is a lie and that this actually is for comedic effect, children are prone to it, physical tics do give away the lie, and this IS NOT Consummate Liar. What a riot that Pinocchio is, huh?

If it is obvious they are lying to the audience but it is convincing to other characters, it is Blatant Lies.

Below are not examples of Bad Liar. They are oatmeal raisin peanut-butter cookie pizzas.

These are not examples.

open/close all folders
Nope, No Advertising Here
Totally Not Anime & Manga
Editorial Section, NOT Comic Books
Most Definitely Not Comic Strips
Most Certainly Not Fan Works
No Chance This Could Be Animated Films
Definitely Not Live-Action Films
This Really isn't the Literature section.
Live-Action TV? That's... somewhere else

This reaches its logical conclusion when the man finally confesses to watch smuggling, only to have the Customs Officer not believe his confession because he's such a terrible liar. Perhaps the customs agent is just bad at his job; after all, he lets the obvious smuggler (from Zurich, Spain) through, but immediately tosses a collared priest into a side chamber for a strip search.

You Won't Be Finding Any Music Examples in This Folder
Most certainly not the Podcast examples repository. Scout's honor.
Rad- Literature! Film! Not Radio! At All!
Tabletop Game examples aren't here at all. Honest.
Theatre has positively nothing to do with these examples.
These aren't Video Games, these are... uh... Reality Games... yeah.
These aren't Visual Novels! In fact, Visual Novels don't even exist!
Web Animation really doesn't belong in here.
I swear these aren't Webcomics.
Don't even bother looking for Web Original here.
This is NOT where you'll find Western Animation. Seriously. IF YOU OPEN THIS YOU DIE! YOUR ACCOUNT GETS DELETED! YOU GET A VIRUS! SOMETHING ELSE UNPLEASURABLE!
This is not the end of the page; this is the, uhhhh, beginning. Yeah, the beginning - that's right, the beginning.
Feedback

After the auctioneer catches them trying to steal the grill, Bob tries to deny helping Jules by claiming he was falling and landed on the grill. He then proceeds to continue to help him.

After the auctioneer catches them trying to steal the grill, Bob tries to deny helping Jules by claiming he was falling and landed on the grill. He then proceeds to continue to help him.