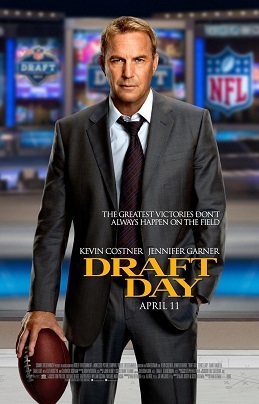 You only get drafted once.
Advertisement:

Draft Day is a 2014 American sports drama film directed by Ivan Reitman and starring Kevin Costner. The premise revolves around the challenges faced by the fictional general manager of the Cleveland Browns (Costner) and in the final hours before the 2014 National Football League Draft.

Sonny Weaver Junior (Costner) is responsible for making draft picks and trades with other NFL franchises. When the GM of the Seattle Seahawks offers Sonny the first overall draft pick in exchange for multiple first-round picks in the next three years, Sonny takes up the offer, which would allow the Browns the chance to select top prospect Bo Callahan (Josh Pence), yet he is adamant that linebacker Vontae Mack (Chadwick Boseman) is the better option. Draft Day revolves around Sonny's choices and the reactions of others in the Browns organization and the entire league, including head coach Vince Penn (Denis Leary) and finance manager Ali Parker (Jennifer Garner). Basically, a high-stakes dramatization of a sports fan's annual fantasy draft.

When the idea was first made public, the film was to be centered around the Buffalo Bills, but the studio subsequently changed it to the Cleveland Browns because of cheaper production costs in Ohio. The film contains multiple Real Life football analysts, commentators, and players.