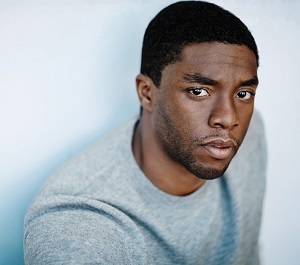 Wakanda Forever.
"You're not free unless you can show the good and the bad, all sides of them. So to me, when I play a character, it's important that I can show every aspect of them."
Advertisement:

After numerous small roles in TV series in the 2000s, he rose to prominence in the mid-to-late 2010s when portraying Jackie Robinson in 42, James Brown in Get On Up and Black Panther in the Marvel Cinematic Universe, who appeared for the first time in Captain America: Civil War.

He passed away on August 28, 2020 at the age of 43 due to complications from stage IV colon cancer. He had battled the illness for four years, and it was not publicly revealed until after his death.

"In my culture, death is not the end. It’s more of a stepping-off point. You reach out with both hands and Bast and Sekhmet, they lead you into a green veld where you can run...forever."
Feedback

Before he was Black Panther, Chadwick Boseman auditioned for the role of Drax in GOTG.

Example of:
What Could Have Been

Before he was Black Panther, Chadwick Boseman auditioned for the role of Drax in GOTG.