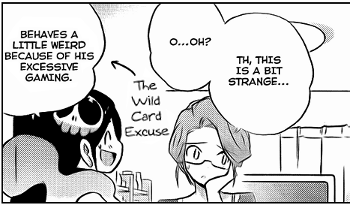 Chester: Killer Crash suit, dude!
A.J: Yeah - wherever did you get it?
Timmy: ...internet?

The Wild Card Excuse is a Subtrope of Blatant Lies. It often consists of a Blatant Lie or an excuse that is elevated to a Running Gag in the series.

Compare Blatant Lies, Global Ignorance, Bad Liar, It's for a Book, I Have This Friend. Weirdness Coupon relates to how people react to the perceived wildcard.