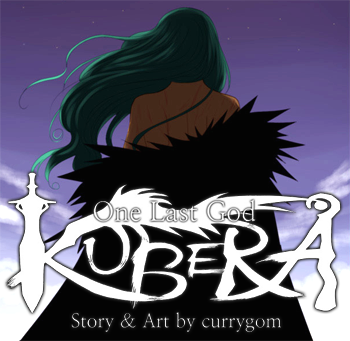 "This is a war with no villains, only victims... and a story where someone, in the end, will have to cry."
Advertisement:

Kubera Leez is a happy-go-lucky girl who has never left her isolated village for all of her life. Everything changes on her 16th birthday when the village is destroyed, and she gets taken in by Asha, an enigmatic and unfriendly mage. It soon becomes clear that she has found herself embroiled in a battle spanning space and time over the mysterious "power of the Name," a battle with players among gods, sura, and humans alike. And it just so happens that Kubera was herself named after a god, a detail that has made her one of the key pieces in a cosmic war without villains, only victims.

One Last God: Kubera is a fantasy/action Korean Webtoon about the ordeals and destiny of a girl with the name of a God. Names of deities and elements of Hindu Mythology were borrowed to create a distinctive and original fantasy setting. It is being serialized here

in Korean. The author's blog

is routinely updated with new information about the world and the characters; it contains major spoilers for those who have not caught up with the story yet.

, with updates on Monday.

The author has written a side-story taking place many years before the main story, called The Finite. It follows the story of the supporting character Kasak's parents, a human Quarter named Ian Rajof and Taksaka the Destruction Dragon.