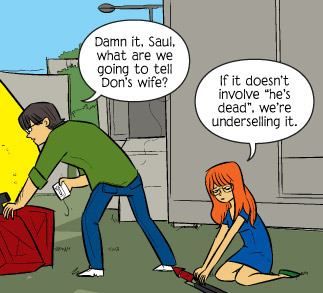 "Do sit down, Sergeant. Shocks are so much better absorbed with the knees bent."
— Lord Summerisle, The Wicker Man (1973)

Bad news is of course hard to tell to other people (unless someone is feeling malicious), which means it's preferable in those circumstances to try to break the news as gently as possible.

There are several methods. One of the most common in fiction is to tell the recipient to sit down before hearing the news, often in case the news is upsetting enough to cause Fainting. Often, to show how tough or badass they are, the listener usually says, through clenched jaws, "I think I'll stand" or "I prefer to stand" or some variation thereof.

Regardless of the delivery, how the recipient reacts can vary, before and after hearing the news. Before, some might be so anxious, they can shout "Just Tell Me!", while others might ask for a minute to prep themselves. After, some can be happy (if the news was actually in their favor without the bearer knowing it), and some can react even worse than the bearer feared.

A staple trope of both the Police Procedural and the Medical Drama, in which breaking the news of a loved one's death is regularly portrayed as the most difficult part of a cop's/doctor's job.

A Dramatic Sit-Down is likely at some point.

And it should be noted that methods have been around long enough for many to be discredited. Expect many instances of this trope to be Played for Laughs. One common gag is Bad News, Irrelevant News.

A Sub-Trope of Bearer of Bad News. A Super-Trope to Bad News in a Good Way, Good News, Bad News.

Has nothing to do with Breaking Bad.

Alternative Title(s): You Better Sit Down