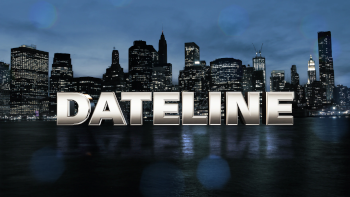 "Hi there. Why don't you take a seat right over there... what are you doing?"
— Chris Hansen, every time they "catch a predator".
Advertisement:

Dateline, also known as Dateline NBC, is a Prime Time News show and one of the largest, most popular, and most infamous news programs ever. It started airing in 1992 on NBC and has never entirely gone away.

The program was conceived in 1992 mainly as a cheap schedule filler and about the 73rd attempt to unseat 60 Minutes. It was hosted by Jane Pauley and Stone Phillips, the latter of whom would become the face of the main Dateline. The series existed mainly to fill holes in NBC's programming schedule; during the bulk of the 1990s, it was on more nights than not. Today, archived (rerun) Dateline crime stories are used for this same purpose on MSNBC, Investigation Discovery, and TLC during dead periods.

Dateline drew infamy with its constant stream of fluff stories, You Can Panic Now stories, and screw-ups — most notably, an early 1992 segment got into hot water when it falsely claimed that 1973-1987 GM pickup trucks had leaky and explosive gas tanks (when in reality, the only reason they exploded for the cameras was the remote controlled explosives the NBC crew put there). This resulted in the firing of a couple Dateline producers and led to Michele Gillen (the correspondent involved in the segment) getting transferred to NBC's affiliate in Miami, where she became an anchor of the station's evening newscasts.

Recurring segments include "The Dirty Dozen" (in which it takes a critical eye to health inspection scores of various fast-food restaurants), Could This Happen to You? stories, as well as full length episodes dealing with True Crime mysteries (the show has done so many episodes about murder cases involving well-to-do, adulterous suburban types, it's been nicknamed If You Marry a Doctor, You Will Die). Many of the episodes are narrated by Keith Morrison, whose voice can be described as "Mr. Rogers as-a-creepy-old-man".

The series began to fade by the late 1990s when NBC began shoring up its late night line-up, which meant fewer dead slots to fill. Stone Phillips left the series (Jane Pauley had left several years earlier) and Ann Curry and Chris Hansen took over as main anchors for the series.

Dateline returned to the spotlight in 2004, when a segment Hansen did with the cyber-vigilante group Perverted Justice catching men attempting to arrange sexual encounters with underage teenagers, "To Catch A Predator," garnered a huge amount of publicity. This led to a whole series of Dateline "To Catch A Predator" specials and a spin-off, "To Catch A Predator: The Raw Tapes", which shows longer versions of the confrontations between Hansen and the predators. Controversy was sparked, mostly by accusations of entrapment by lawyers for the accused predators and the high profile suicide of a local district attorney caught in the sting (but who did not appear on the show, having discovered prior to his death that he had been exposed). Dateline and Hansen ultimately achieved Memetic Mutation, with parodies appearing on different shows like South Park, It's Always Sunny in Philadelphia, Arrested Development, The Boondocks, Robot Chicken, Squidbillies, etc. Whether because of the legal controversies, the increased popularity making it hardernote the final sting only caught seven men, where earlier ones had ensnared dozens to lure men to the houses, or because the "demographics" of the alleged predators had declined,note earlier stings caught doctors, teachers, programmers, a rabbi, etc., but later ones nabbed unemployed or menial laborers no new "TCAP" segments were produced after 2007. According to a Facebook comment in 2009, it might return someday. If so, it will likely be without Hansen, who had his own embarrassing scandal

which resulted in him leaving NBC.

Dateline is still on the air, now anchored by Lester Holt, in a Friday Night Death Slot (right before the local news) and also airs on Sundays opposite 60 Minutes between seasons of NFL football. It has some internal infamy, as CNBC airs 60 Minutes on CNBC rather than Dateline: Business Edition because of the show's lack of any non-tabloid coverage... though there being a Dateline: Business Edition says something.

The launch of the short-lived Rock Center with Brian Williams in November 2011 suggests that NBC knows that Dateline should never be omnipresent on the main network schedule again.

Not to be confused with Dateline, where it took the name from.

Why don't you use these tropes over there?

"I'm Chris Hansen with Dateline NBC, and we're doing a story on tropers. If there's any other tropes you'd like to add, feel free to do so. Otherwise, you're free to leave this page anytime.