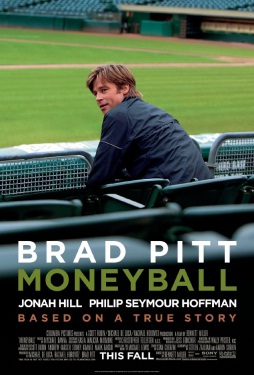 It's hard not to be romantic about baseball.
"People who run ball clubs, they think in terms of buying players. Your goal shouldn't be to buy players, your goal should be to buy wins."
— Peter Brand
Advertisement:

Moneyball is a 2011 American film based on the best-selling book of the same name, following the Real Life story of how Oakland Athletics GM Billy Beane built a winning team on a shoestring budget despite baseball's the-rich-get-richer environment, using overlooked advanced statistics and players to make up the competitive advantage.

Billy goes through a bit of a depression after a post season loss to the New York Yankees as he realizes that with his ballclub's meager salary, they just can't compete with the likes of teams that spend three times the amount of money they can. Destiny along with the Cleveland Indians put Billy together with Peter Brand as they start using Bill James-style statistics (aka: Sabermetrics) to rebuild the Oakland Athletics into a League powerhouse once again.