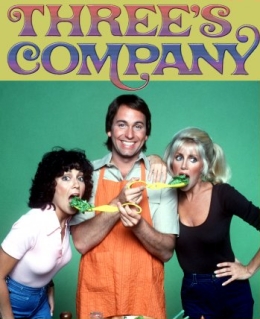 The girls just looove Jack's... er, foodstuffs.
"Come and knock on our door...
We've been waiting for you...
Where the kisses are hers and hers and his,
Three's company, too."
Advertisement:

Iconic late-'70s Roommate Com/slapstick sex farce/comedy of errors series. Frequently dismissed as the archetypal Jiggle Show, it's also marked by clever writing, strong performances and fantastic physical humor. Based on the Brit Com series Man About the House, it originally aired on ABC from 1977–84.

In order to share an affordable apartment with two lovely young ladies, Janet Wood (Joyce De Witt) and Chrissy Snow (Suzanne Somers), cooking student Jack Tripper (John Ritter) must pretend to be gay around Stanley Roper (Norman Fell), the repressed, bigoted landlord. Roper, in turn, frequently finds himself fending off the advances of his good-natured but sexually frustrated wife Helen (Audra Lindley), who knows Jack's secret but likes him and the girls enough to keep mum. Complications are introduced through a variety of misunderstandings and mishaps, often caused by the thinking-impaired apartment mates or their cumbersome friends.

Everyone in this series suffers from Genre Blindness at one point or another, which is expected considering the show is essentially a comedy of errors. The show launched the careers of Ritter and Somers, and revived that of Don Knotts (who joined the cast as new landlord and wannabe-swinger Ralph Furley after the Ropers left for their own series following the third season).

Codified, if not created, an entire set of plot tropes based on silly misunderstandings and leaping to conclusions. Lucille Ball was a huge fan of the show thanks to its pitch-perfect use of sitcom tropes and physical comedy, and even appeared to host a Clip Show.

In later years, it's almost more famous for the behind-the-scenes issues with Suzanne Somers' contract dispute— she demanded top billing for being Ms. Fanservice despite John Ritter being the main character. After Somers' refusal to cooperate made shooting next to impossible, producers retaliated by showing her in no uncertain terms just how unwelcome she was. The series endured many cast changes, nasty backstage disputes and overall changing tastes in television to become one of the most fondly-remembered (and frequently emulated) shows of the era.