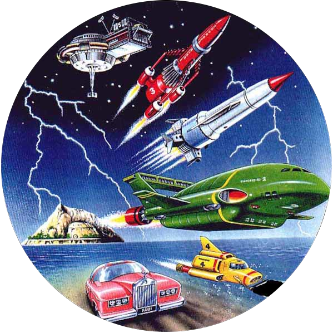 ), Thunderbirds is the story of the Tracy family, a wealthy clan who embark on a unique philanthropic venture.

In the year 2065, billionaire ex-astronaut Jeff Tracy and his five sons (Scott, Virgil, Gordon, John and Alan) form "International Rescue", an organization whose purpose should be self-explanatory. They use technology designed by their resident Techno Wizard, "Brains", which is far beyond anything possessed by any military or civilian agency on the planet, even given the series's far future setting of the late 21st century.

Every week, some monstrous disaster would occur, and the boys (primarily Scott and Virgil) would pilot their awesome Thunderbird aerospace craft to the scene, moving at speeds that would make an aeronautical engineer drool. Scott would get there first, survey the situation, and call back to Virgil, who would then arrive at the scene with the right equipment loaded into the cavernous interior of Thunderbird 2's "pod". Amongst other things, a drilling vehicle (Mole) or an underwater rover (Thunderbird 4) could be loaded into 2. In fact, the other wiki

has a list of the many bizarre vehicles deployed.

There were five Thunderbirds, one for each brother:

Acting as an espionage back-up, to prevent any of IR's tech from being stolen and used for military or destructive purposes, was prim and proper spy Lady Penelope, and her rough-edged cockney Battle Butler Parker, in Penny's pink six-wheeled (and heavily-armed) Rolls-Royce limousine, FAB 1.

The miniatures used were cutting edge for the time. The show was described as feature film quality, to the point where Lord Grade, the head of the commissioning company ITC Entertainment, upped it from a half hour to an hour long drama (necessitating additional scenes to be shot for the first few episodes).

Oh, and all the characters were puppets. The show was filmed in Supermarionation, which was a process using souped-up marionettes with moving lips electronically synchronized with pre-recorded dialogue.

This show is a classic in its native Britain, and around the world. The first season was such a success that it was decided to make a full-blown movie before production began on the second season; the result was Thunderbirds Are Go, wherein the Tracys must rescue an imperilled Mars rocket after a scrape with the local lifeforms. Expected to be a blockbuster of James Bond proportions, it performed poorly at the box office.

An unsuccessful trip made by Lew Grade to try and sell the show to American networks ensured the second season would be the series' last; further, amid corporate fears that the bubble had burst, Gerry Anderson was instructed that said second season be cut back to just six episodes. United Artists, surprised at the failure of the first movie, subsequently commissioned another — Thunderbird 6, where designing a new Thunderbird vehicle is put on hold when a state-of-the-art luxury airship is in danger — and this also flopped. But by then Anderson was already at work on new Supermarionation projects with a new generation of puppets.

Punk/new wave band The Rezillos released a song "Thunderbirds Are Go" in 1978, singing the praises of the series: "the TV show that's never been beat." 80s band Fuzzbox released a single called "International Rescue" as an affectionate tribute/parody of the series

, which made it to number 11 in the UK charts. Also in regards to the show's presence on the music scene, Gerry Anderson co-directed the video for "Calling Elvis" by Dire Straits in 1991, where the band members appear as marionettes and footage from Thunderbirds is intercut with footage of a woman meandering around her house.

In 1982, ITC took Scientific Rescue Team Techno Voyager (note: onscreen it is transliterated in Engrish as Techno Boyger, thus the vehichles retain the TB designation making the Thunder-Birds connection slightly more obvious), a 24-episode anime on Fuji TV inspired by the series, and dubbed it as Thunderbirds 2086. This series is not considered part of the Thunderbirds canon by most fans, but interestingly was originally planned as such until a dropoff in popularity of the franchise in Japan led to difficulties in finding a sponsor. Nevertheless, it tanked and was canceled early in both Japan and the UK, though the US and Canada did get all 24 episodes in syndication.note Episodes 19-24 remained unbroadcast in Japan until 2008. A pre-Macross Artland worked on episode 10, which notably features a Misa Hayase prototype as a minor character.

The early 90's saw a few attempts to revamp the show for a new American audience, the first being airings on Fox on Saturday mornings, with the episodes whittled down to fit in a half-hour time slot with rerecorded dialogue and some new music. After a fairly short run this version faded from view. Much stranger was the attempt that followed shortly afterward, known as Turbocharged Thunderbirds. Live action segments were added of the "Hack Masters", Trip and Roxette, operating out of "Hacker Command" (that is, Thunderbird 5), where they coordinated the actions of the supermarionettes from the 60's footage. What's more, the forces of evil now reported to another new character, a giant spectral head named "The Atrocimator". Who was voiced by Tim Curry.

2004 saw the release of a live-action version directed by Jonathan Frakes; unfortunately, Universal's Executive Meddling and being trapped in Development Hell since the 90s turned what could've been an awesome film into something most fans of the franchise would like to forget, and many, including Anderson himself, consider Trey Parker and Matt Stone‘s Affectionate Parody Team America: World Police, which was made using marionettes similar to the original series, to be the true Thunderbirds movie released that year.

There are also three audio episodes recorded by the original cast and released in the Sixties. In 2015 these were used as the basis for three new episodes filmed in Supermarionation style. And in 2021, Big Finish acquired the rights to the series and released three full-cast audio adaptations of John Theydon's tie-in novels.

There is a Recap in desperate need of assistance! Thundernerds are go! Tropes applying to the movies can be found there as well.

The intro lists off all the main characters.

The intro lists off all the main characters.