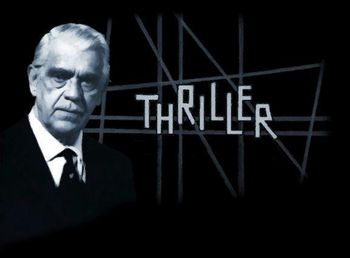 Sadly, there are no dancing zombies in any of the episodes.
Advertisement:

Thriller was an American Genre Anthology TV Series that aired in the 1960s and lasted for two seasons on NBC. The show was primarily focused around horror and suspense stories which were presented by Boris Karloff, who would act as the show's Horror Host, as well as starring in several episodes. Many of the show's episodes were written by Robert Bloch, who also adapted several of his own stories. One of the best remembered things about the series was its musical score, which could be genuinely scary, and won the show an Emmy Award.

The show is not to be confused with the Thriller genre, the Michael Jackson album/song/video Thriller, or a British TV show from the 70s with the exact same name.

Tropes appearing in Thriller include: