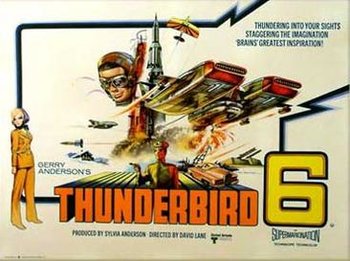 Thunderbird 6 is the second Supermarionation feature film based on Gerry Anderson's TV series Thunderbirds, released in 1968.

The New World Aircraft Corporation gives Brains an open invitation to design a new aircraft. When he suggests an airship, he is mocked and ridiculed, although the NWAC go ahead and build the antigravity Skyship One. While Alan, Tin Tin, Lady Penelope and Parker travel on the Skyship's maiden voyage as International Rescue's representatives, Brains remains on Tracy Island, designing Thunderbird 6. Each of his designs is dismissed by Jeff Tracy.

Unbeknownst to International Rescue, however, a man known only as the Black Phantom is moving against them. Tired of merely taking photographs, he plans to hijack the Thunderbirds themselves. His agents murder and replace the crew of the airship, and plant recording devices around Lady Penelope. Their plan is to Quote Mine her to summon the Thunderbirds to the Black Phantom's remote base, where he will be able to steal those magnificent machines. Unfortunately for the villains, Alan, works out their plan, and Lady Penelope is able to warn International Rescue just in time. Thunderbirds 1 and 2 destroy the Black Phantom's base. On the airship, however, things aren't going so smoothly. A gunfight disables the ship's antigravity system, and it plunges towards a British missile base. All the Thunderbird craft are too heavy to attempt a rescue - except the antique Tiger Moth biplane that Alan and Tin Tin had flown to meet the airship. Brains flies the Moth onto the top of the airship, but there the leader of the villains forces Penelope at gunpoint to get in the plane with him and plans to leave the others behind. Alan shoots him, and the plane takes off with an inexperienced Penelope at the controls and everybody else clinging on to the wings and landing gear. Shortly after, Skyship One crashes to the ground, starting a chain reaction that obliterates the missile base. The remaining impostors are killed in a shootout aboard the Tiger Moth, and with Alan's help Penelope lands the plane in a field. The Tiger Moth is then declared the new Thunderbird 6.