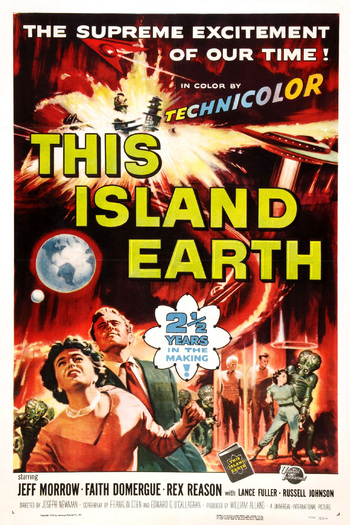 This Island Earth is a Science Fiction novel by Raymond F Jones, first serialized in Thrilling Wonder Stories magazine in 1949 before being published in book form in 1952. It involves a group of aliens using Earth as a pawn in an intergalactic war by recruiting Earthlings into a group known as the “Peace Engineers”. The better-known 1955 film adaptation, directed by Joseph M. Newman and Jack Arnold, was one of the first sci-fi films to be made in glorious Technicolor and was critically acclaimed for its special effects and storytelling.

Dr. Cal Meacham (Rex Reason), nuclear physicist, dashing pilot, and media darling, is flying home from a conference in his personal jet when a sudden engine failure sends him hurtling towards the ground, only for him to be saved at the last minute when a green glow surrounds the vessel and helps it land safely. The weirdness continues at his lab, when Meacham and his assistant Joe Wilson (Robert Nichols) ponder over a strange electrical capacitor they received that is obviously more advanced than any human technology. Placing another order from the mysterious company that sent it results in a huge shipment of arcane doodads and a complex set of instructions. With the help of a montage, the two successfully assemble an "interocitor," and receive a transmission from an orange-skinned, white-haired, dimple-foreheaded, definitely-not-an-alien named Exeter (Jeff Morrow). He congratulates Meacham — apparently the interocitor is a test he and his colleagues use to recruit scientists for a special project — and invites Meacham to join him.

After a brief ride on a windowless, unmanned plane, Meacham joins Exeter and a host of other scientists at a stately mansion, where Meacham is reunited with Dr. Ruth Adams (Faith Domergue), who doesn't seem to remember the romantic time the two spent together despite Meacham's insistence (in a later scene, she reveals that she was actually testing him to see if he's on the level). Eventually Ruth and Meacham, along with their colleague Steve Carlson (Russell Johnson—yes, The Professor himself), grow suspicious about the weird white-haired fellows running the place, and of the fact that all the scientists there are specialists in extracting nuclear power, but not utilizing it. The three of them make a break for it, only for their hosts to blow up the mansion, abduct Meacham and Ruth in a flying saucer, and kill Steve, making him a bit character probably not worth mentioning in a summary of the movie.

The Earthlings' suspicions confirmed, Exeter calls for a truce as they are en route to his homeworld of Metaluna. He explains that their planet is under siege from hostile aliens and uses an energy field to remain safe, but said shield requires gigantic quantities of nuclear power to operate, thus prompting their interest in Earth. Once on Metaluna, Exeter brings Meacham and Ruth before the Monitor who runs Metalunan society, who ignores Exeter's protests and sentences the Earthlings to the Thought Transference Chamber to make them more willing partners. But Exeter rebels and helps the Earthlings escape, though he is grievously injured by a rogue Mutant worker creature. The three of them hijack a saucer to return to Earth, only to be confronted by the same Mutant, who menaces Ruth for a bit before keeling over. Once back on Earth, a dying Exeter literally drops Meacham and Ruth off before sending his flaming saucer into the ocean.

This Island Earth returned to the big screen 41 years later when it was riffed by the Satellite of Love crew in Mystery Science Theater 3000: The Movie. It was also one of the inspirations for The Coneheads on Saturday Night Live as Dan Aykroyd and writer Tom Davis were fans and tickled by how nobody seemed to notice the enormous heads of Exeter and the other aliens. "Weird Al" Yankovic paid homage as well with the Interocitor appearing in his "Dare to Be Stupid" video and mention of the device in his film UHF, and the punk band The Misfits dedicated a song to the film on their album American Psycho. The depiction of the planet Gamilon in Star Blazers as a subterranean society entered by flying into crater-like holes in the planet's surface seems to have been clearly inspired by Metaluna in this film. The makeup design of the alien Rylans and the villains' use of meteorites as planetary bombardment weapons in The Last Starfighter seem to be inspired by this film, as well.

This Island Earth provides examples of: