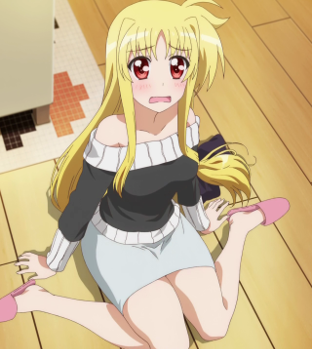 Flexiblity, thy name is anime.
Advertisement:

A character, usually female, who collapses from exhaustion or dejection sometimes lands on their knees, with the lower legs splayed out sideways while the thighs remain together. This is difficult to do for all but the most limber of people in real life, and even then it's not very comfortable.

This usually occurs when the character's body is facing the camera instead of in profile, ignoring three-dimensional perspective in favor of looking cute.

The obvious reason for this is that far more commonly, the female suffers Magic Skirt failure due to landing in the far more realistic and comfortable position of sitting down with her thighs spread, leading to a Panty Shot. Open or closed, the sitting position is called pettanko due to the legs visually flattening out against the ground. It is independent of the sitter's chest curvature.

In Real Life, this is called "W"-sitting,

and is very common is young children who have difficulty maintaining balance in other sitting positions. It can cause strain on the hips and knees, so most medical practitioners advise against letting kids sit this way.