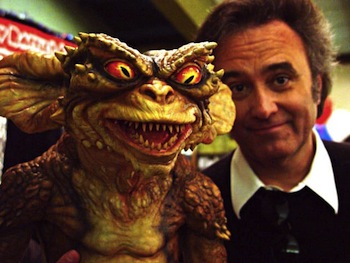 "If you're doing a family movie, you don't want it to be stupid. Farting chihuahuas is not my idea of entertainment for kids or adults. So you try to make a movie that adults can see on one level, and kids can see on another."
Advertisement:

Dante's work is notable for the strong affection he has for '40s and '50s horror movies (Matinee is a love letter to William Castle, for example), and his taste for black comedy and political commentary. He first got attention for The Movie Orgy, a seven-hour-long collection of weird film clips, ads and trailers that Dante still curates and screens around the United States. After a few smaller successes, he directed Gremlins, which launched a long, contentious relationship with Hollywood, which didn't seem to understand that Dante had a few axes to grind, especially with the political climate celebrating the '50s as a happy Golden Age and the suburbs as a great place to be. With a few exceptions, though, he's relatively subtle about his opinions.

Actually probably better known to people of a certain age for Eerie, Indiana than for his movies; he was an executive producer and directed five episodes. He also appeared As Himself in the Series Finale "Reality Takes a Holiday".

The films he directed include:

He also directed segments of the Anthology Films Twilight Zone: The Movie and Amazon Women on the Moon, as well as the Masters of Horror episodes "Homecoming" and "The Screwfly Solution" and the pre-show for The Twilight Zone Tower of Terror.

Tropes present in Dante's work include: