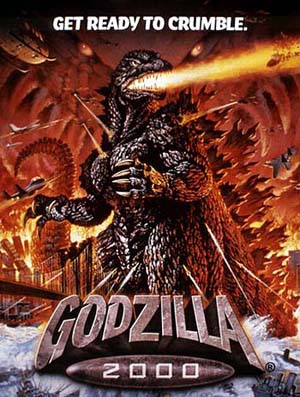 "If you can't take the heat... run."
Yuji Shinoda: To study Godzilla will be the key to disclose the secrets of living beings on the Earth.
Mitsuo Katagiri: Even so, you can't allow all the damage caused by Godzilla.
Advertisement:

Godzilla 2000, known in Japan as "Godzilla 2000: Millennium" (Gojira Nisen: Mireniamu), is the 23rd canonical entry in the long running Godzilla franchise. Released in December 1999, it is the first film of the third cycle of Godzilla movies, known officially as the "Millennium Series". It is a standalone film with that ignores the continuity of previous installments.

Over the years, Japan has been besieged by numerous attacks by Godzilla, so much that Godzilla attacks are basically viewed as a fact of life. The Godzilla Prediction Network (or "GPN"), helmed by Yuji Shinoda and his daughter Io, has been established to try and track Godzilla's movements and predict when he will come ashore. Accompanying them is Yuki Ichinose, a reporter who has been tasked with trying to get information on Godzilla. Shinoda believes Godzilla should be kept alive for study: Mitsuo Katagiri, his academic rival and leader of the Crisis Control Institute (CCI), believes the opposite, that Godzilla is too dangerous to be kept alive, and uses his resources to try and destroy him.

One day, the CCI discovers an enormous rock on the ocean floor and brings it to the surface, where it reacts to the sunlight and becomes mobile. It seeks out Godzilla and engages him in battle, defeating him, though in the process Godzilla burns away its crust with his atomic breath, revealing the rock to be a UFO. When the UFO later flies away and lands in Tokyo, it begins hacking into the city's computers, searching for information on Godzilla for reasons unknown. Meanwhile, Shinoda discovers a unique chemical compound in Godzilla's cells, a medical breakthrough that could justify the monster's existence, while Godzilla himself arrives in Tokyo bay, itching for a rematch with the UFO...

Made in the wake of the 1998 In Name Only American remake, Godzilla 2000 was released in Japan only a year later in order to bring Godzilla back to his roots. The film didn't fare so well at the box office due to a number of problems, such as the sluggish pacing, its uninspired musical score, and the fact that it was ultimately viewed as a blandly typical Godzilla movie, barely distinguishable in tone and content from the Heisei films that preceeded it. Still, it was enough of a success that TriStar found it worthy of a theatrical release outside of Japan. The American version was given a deliberately campy, tongue in cheek Gag Dub reminiscent of the classic Godzilla dubs from the 60s plus significant improvements to the film's pacing, sound effects and musical score, including additional Akira Ifukube tracks. Godzilla also roars more frequently and louder in the American cut. Every change to the film was approved in advance by the original director and producers at Toho. These changes ultimately redeemed the film for most viewers, as it was a modest success in North America both critically and financially, though there are still some who prefer the original Japanese version.

Not to be confused with Godzilla (1998) or Godzilla (2014), other Godzilla films which are also identified with their release years on this website for the sake of differentiation despite technically being One Word Titles.

The film provides examples of the following: