Curiosity Is a Crapshoot 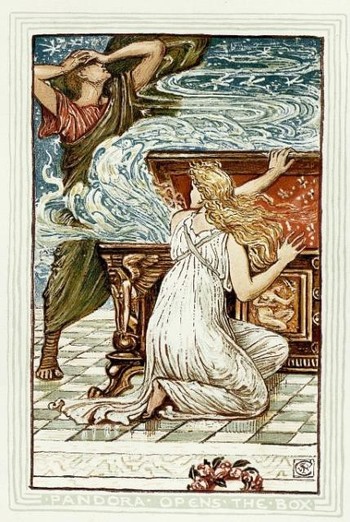 Dammit, Pandora!
"Make your choice, adventurous stranger
Strike the bell, and bide the danger
Or wonder, 'till it drives you mad,
What would have followed if you had."
— The Magician's Nephew
Advertisement:

Generally, every stock aesop has an opposite, equally valid aesop with advice. In fiction, nowhere is this more pronounced than with curiosity. Depending on the genre, idealism, and morality of the story, curiosity can either save your life or prematurely end it.

All in all, by its very nature, Curiosity Is A Crapshoot and the only possible way to have a clue about whether it's rewarded or punished is to be Genre Savvy. In a Survival Horror Film, it's bad to ignore the Haunted House Historian and go into the Haunted House... although deciding that It's Probably Nothing is just as bad. In a Sci Fi flick, usually good (science is about trying to learn things you didn't know) but sometimes over-the-top Nightmare Fuel (because Science Is Bad). Fantasy and folk tales can be difficult to tell due to Prophecy Twists or some Fair Folk's Exact Words, but you usually get a chance to undo it through a series of Impossible Tasks (climb mountains until you wear out thirty pairs of shoes...).

(Things do tend to turn out well for the Constantly Curious or those Curious as a Monkey. In the long run, at any rate.)

Then again, with some author's penchant for Twist Endings (let's not get into Broken Aesop for now) the exact same kind of story can have exactly the same action go from good to bad.

Not to be confused with Apathy Killed the Cat. See also Schmuck Bait and Curiosity Causes Conversion. This may violate the Power of Trust, which can be dangerous.

It has nothing to do with a certain Mars rover

, which has been operating fine since 2012 and is far from being a crapshoot.