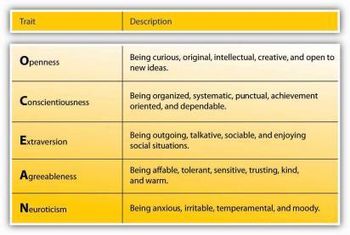 The Big Five is a Big Deal because, out of the major personality inventories floating around, it is the only one that was created empirically, as opposed to The Enneagram and the MBTI. Psychological researchers took major adjectives out of the English dictionary, under the assumption that, if people are a certain way, language should eventually reflect that truth. They then had survey-takers sort all those adjectives into different categories, putting in one pile all the words that meant the same thing. It took a lot of math (trade secret: most of psychology is statistics), but eventually psychologists determined that those adjectives fell into 16 categories, which with even more math got refined into a basic five. Whether the 16-factor model or the 5-factor one is more accurate is still being debated by academic psychologists today.

The Big Five traits provide "an OCEAN of possibility", though we can use a different acronym if that one doesn't float your CANOE. Most of them are Exactly What It Says on the Tin:

The Big Five test does not provide "types" that describe all the different combinations. Partially this is because there would be 32 of them and that would be too much work. Partially this is to avoid pigeonholing; what you score is what you score, and psychologists try not to stereotype. Partially it's because, as with the Myers–Briggs, you can score high on one scale but low on another, and a person with high Extraversion and high Openness is not the same as someone with high Extraversion but only some Openness. But mostly it's because the scales don't combine. If you are Extroverted and Disagreeable, that doesn't make you a Grumpy Old Man, because every adjective you can use to describe a human being is already associated with one, and only one, scale. If you are a Grumpy Old Man, it's because being Extroverted or Disagreeable already means being one.

Obviously, this test is not perfect. For one, it was a textual analysis of the English language, and thus might not be valid for speakers of other tongues. (Translations into other languages have met with varying levels of success; one culture flat-out doesn't correspond to it at all

.) For two, there are a number of traits that the test simply doesn't account for, like manipulation, sense of humor and religiosity. As mentioned, some people still prefer the old 16-Factor theory, while others advocate for the 6-factor HEXACO model

. And finally, pure general intelligence (the so-called "IQ") seems to correlate with Openness To Experience, which psychologists have flat-out admitted must be a mistakenote Or at least something they want to keep quiet about. As mentioned previously, Openness To Experience also correlates directly with the likelihood of being politically liberal. Thus, via transitive properties, the Big Five appears to endorse the idea that conservatives are simply dumb. While some psychologists might find this conclusion gratifying, it's still the kind of stereotyping which psychology, by its very definition, opposes. There's also the fact that Openness also correlates with schizophrenia and bipolar disorder

, suggesting liberalism — or, for that matter, intelligence — may not be all it's cracked up to be. But, again, it's the only personality inventory that was devised by actually inventorying personalities.

Compare The Enneagram and the Myers-Briggs Temperament Indicator.