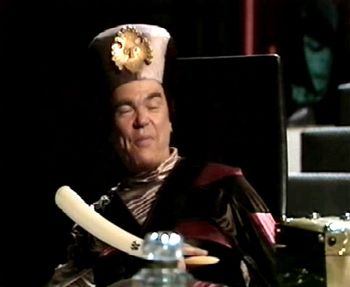 Don't you just hate it when you sneeze in the middle of having a picture taken?
Cordo: Praise the company!
Mandrel: Stuff the company!
Advertisement:

The one with the offhand bit of Logan's Run.

Written by Robert Holmes. This four-episode serial first aired from November 26 to December 17, 1977.

Doctor Who goes all political with this thinly-disguised allegory on the evils of income tax. The TARDIS arrives on the planet Pluto, which in the future has six suns' worth of eternal daylight, a breathable atmosphere and a thriving industrial base. "The Company" controls the entire planet and exploits the workers mercilessly, paying peanuts and taxing everything. As soon as the Doctor and Leela step out of the TARDIS, they find a worker about to commit suicide — he'd arranged for his ailing dad to have a nice assisted suicide, then got told the price had gone up by a good 30% and he'd have to work 23 hours a day (he's already working 21). They distract him with a jelly ba—er, licorice allsort, and introduce him to the concepts of freedom and darkness.

The Doctor and Leela are soon captured by La Résistance, led by Mandrel, and learn that the workforce are being kept calm by a gas piped into the atmosphere. While The Company has a human representative in Gatherer Hade, it is in fact run by alien Usurians, noted for keeping planets in economic servitude. The Doctor is captured, sent on a errand, captured again, almost branded in the face, and eventually convinces La Résistance to stop twiddling their thumbs and start actually resisting the government.

The Doctor succeeds in switching off the paranoia gas and the workers rise up against The Company and ruthlessly kill the hated Gatherer Hade, while the Doctor does some computer jiggery-pokery to bankrupt it. The Usurian "Collector" (a very thinly-veiled Denis Healey parody) is powerless to stop The Company going bust and reverts to his natural form — a harmless fungus.