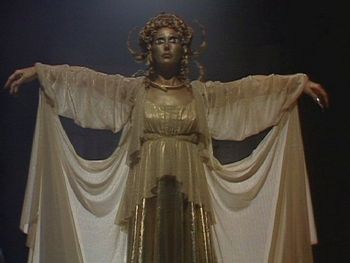 "...I think we're all going to Hell, now..."
"What are you exactly — some sort of wandering Armageddon peddler?"
— Adam Colby, to the Doctor; not too far off the mark, really...
Advertisement:

The one with salt.

Written by Chris Boucher. This four-episode serial first aired from October 29 to November 19, 1977.

A Doctor Fendelman is studying a human skull which archaeologists estimate to be 12 million years old — far older than it can conceivably be — when the Doctor and Leela arrive. Fendelman is using a "Time Scanner" to study the skull, and it is this which has not only drawn the TARDIS to the lab, but also causing the skull to glow with power every time it is activated. His snarky colleagues (including Benedict Cumberbatch's mum) are stumped as to how the skull can even exist.

The Doctor believes that the skull is in fact a relic of the Fendahl: a prehistoric creature that feeds off life force and is a legendary evil from early Time Lord legend. He's proved right when a local cult are transformed into Fendahleen, while Doctor Fendelman's partner, Maximillian Stael, is revealed to have been working with precisely this aim. One scientist, Adam Colby, has escaped the influence of the Fendahl and he, the TARDIS crew and some locals try to use rock salt to defeat the Fendahl. The Doctor leaves Stael a gun when he's frozen in place by the Fendahl, so he can kill himself rather than be taken over.

The Doctor explains that this fatal salt weakness of the Fendahl inspired a folk memory of throwing salt over one's shoulder for good luck. And that much of humanity's race memory might have to do with the Fendahl, and that the skull might be related to Time Lord crimes on the briefly visited Fifth Planet, and that Doctor Fendelman may be the descendant of an age-old evolutionary scheme to produce the perfect minion, but it could all be a coincidence, really. Also, Thea is painted gold as she becomes the Fendahl Core and starts floating about the manor in a ghost-like way while backed by pentagrams.

The Fendahl are defeated, and the Doctor throws the skull into a nearby supernova before getting down to the business of repairing K9.