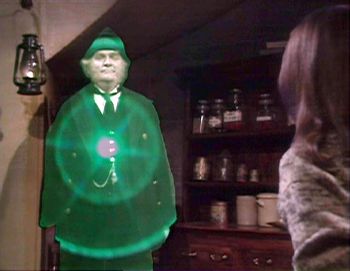 "The localised condition of planetary atmospheric condensation caused a malfunction in the visual orientation circuits. Or to put it another way, we got lost in the fog."
— The Doctor
Advertisement:

The one where Leela's eyes change colour.

Also the one that got hijacked.

Written by Terrance Dicks. This four-episode serial first aired from September 3 to 24, 1977.

Season fifteen kicks off where season fourteen finished: Gothic Horror. The TARDIS materialises in a lighthouse on an isolated piece of shoreline just after a mysterious light has been seen falling from the sky. One of the lighthouse-keepers is found electrocuted. The Doctor and Leela (who throws on a nice warm sweater) investigate.

Soon, a sudden fog bank descends, causing a ship to founder on the rocks. The posh survivors straggle ashore but they soon find that they're locked in the lighthouse with a Rutan — a jelly-like alien that can take other forms and has been masquerading as lighthouse-keeper Reuben.The Rutans are described by the Doctor as being the ancient and implacable enemies of the Sontarans, who have appeared multiple times in the show's history (though this is the only appearance so far of the Rutans). Everyone who's not on team TARDIS dies. The Doctor kills the Rutan warrior with a makeshift explosive, and then uses a diamond that one of the survivors had been carrying to focus the lighthouse's light into a laser beam to destroy the incoming Rutan mothership. Despite the Doctor's warning, Leela looks at the explosion and gets blinded. She promptly tells the Doctor to kill her, because she's a liability, but he explains that the blindness is temporary — although it did change her eye colour permanently, from brown to blue.note Louise Jameson demanded the change because the brown contact lenses hurt her eyes.

On a trivia note, this is the only classic-era Doctor Who story to be taped in Birmingham rather than London, which might well have been to its advantage because the staff of the small Pebble Mill studios didn't want to waste this chance to prove they could stage a quality drama. The serial is also remembered for a 1987 American broadcast which was hijacked by some guy

in a Max Headroom mask. The hijacker remains unidentified as of this writing.