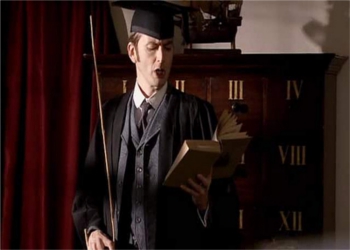 Technically speaking, the Doctor isn't in this picture...
"It's all becoming clear. The Doctor is the man you'd like to be, doing impossible things with cricket balls."
— Joan Redfern
Advertisement:

The one where the Doctor hates pears so much, they had to remove his rant from the episode.

And his dark-skinned female companion is hit with the double whammy of racism and chauvinism.

"Human Nature"/"The Family of Blood" were adapted for TV by Paul Cornell from his Doctor Who New Adventures book Human Nature. The novel starred the Seventh Doctor and Bernice Summerfield, and remains the only novel to be directly adapted, rather than mined for story elements.

The two-part episode was nominated for a Hugo Award. In 2020, Cornell revisited it with three short stories, done as part of the COVID-19 lockdown watchalong.

The story opens in traditional Doctor Who style — the Doctor and Martha burst into the TARDIS, being shot at while trying to escape from a family of alien hunters. The Doctor finds himself forced to use a last-ditch Gallifreyan escape method...

And Now for Someone Completely Different.

It's 1913. Mild-mannered Upper-Class Twit schoolteacher John Smith teaches history at a Boarding School. He's having a great time keeping a beautifully illustrated dream journal and chatting with Joan, the school nurse. Lately, his dreams have been about blue boxes in space, strange men who are all the same somehow, frightful aliens and being a "Doctor". Joan tells him that she'd love to read his tales, and as they grow closer, he ends up asking her out to the village dance.

Then, one November night, some of the monsters from his nightmares turn up in reality. They're looking for "The Doctor", and they've mistaken ordinary Englishman John Smith for their prey. The monsters steal the bodies of people living in the school area, and are on the hunt...

Weirder yet, John's maid Martha also insists that he is the Doctor, and begs him to change back. Obviously, she's gone mad; she believes that his dreams are real, that she can travel among the stars, and even — with her skin colour! — that she can be a medical student. Smith dismisses her ideas as lunacy. But some of her ramblings spark memories inside him, memories of a life he's sure he never lived. And there was an odd watch in his living room, which Martha desperately wants, but which has been stolen by a young school boy by the name of Timothy Latimer.

It turns out that the Doctor has changed himself into a human to escape the hunters. Completely. Because the aliens will die after three months without food — and the Doctor is food — he's decided to subject himself to the agonising process of reprogramming his own body during that time. He has one heart, one human brain and one hell of a confused look on his face when he's eventually cornered by the monsters, who demand that he turn himself into the Doctor again. But he, completely bewildered, still has no idea what they're talking about... not even when they take his friends hostage.

Continued in "The Family of Blood".