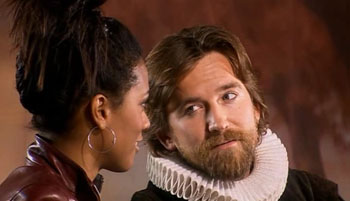 Shakespeare's trademark ruff is actually a neck brace. We're just as surprised as you are.
The Doctor: When you get home you can tell everyone you've seen Shakespeare.
Martha: Then I could get sectioned!
Advertisement:

The one where the Queen wants the Doctor's head.

This episode contains a lot of very silly Shakespeare jokes, almost all of which are also very clever, very obscure Shakespeare jokes in disguise. We open in extremely Elizabethan London, where a young man courts a damsel via period song. The damsel (unlike Juliet) rejects the idea of waiting until marriage and invites the man up. She then pulls a Darla and toys with him a bit before putting on her witchy game face, inviting in her equally witchy mothers, and devouring her ardent swain. This is not about premarital sex or gay marriage being evil, though. It's just campy.

Post-credits, enter the Doctor and Martha, off to the Globe Theatre to see Love's Labour's Lost. Martha is concerned about stepping on a butterfly or encountering old-timey racism, but the Doctor shrugs these off. The Doctor riffs on the parallels between London then and now, including realizing a crazy doomsayer to "global warming". This isn't an attack on climate theory, though. It's just silly.

At Martha's instigation, Shakespeare comes out after the play to address the audience. The witches magic him into promising to perform the sequel, Love's Labour's Won, tomorrow night. The Doctor, knowing that this play is a Missing Episode, realizes something is afoot. The pair decides to stay the night at Shakespeare's inn and get to meet the dude. Shakespeare is a genius-level but bawdy empath, clever enough to be immune to psychic paper (although he does love the word "psychic"). He hits on Martha but blows it by constantly referencing her race. "It's political correctness gone mad," mutters the Doctor.

There Is Only One Bed. They both crawl in, their faces very close... and the Doctor tells her that there's something he's... missing. Something... staring right into his eyes. Something... close, but just out of reach. "Rose would know what to do", he sighs moodily, oblivious to the sexual tension. Martha looks extremely annoyed. Meanwhile, the witch has crept in at night in order to plant some words in Shakespeare's script, just in time for the landlady to walk in on her. So the witch kills her. Martha sees the witch flying off on her broomstick, and bemusedly IDs her.

This clue, along with the murder of the Master of the Revels, leads the Doctor and Martha to Bedlam, the insane asylum, note also known as Bethlem Royal Hospital with Shakespeare tagging along. They interview the architect who designed the Globe — fourteen sides, like fourteen lines in a sonnet — and realise the plan: the performance of Love's Labour's Won will be a spell to allow the witches to take over Earth. A witch shows up and kills off the architect... way too late, as the Doctor has worked out the witches' True Name... Carrionite. The mere word banishes her, and the trio split up: Shakespeare to stop the performance of the play, and the Doctor and Martha to find Witch Headquarters.

They don't succeed. Shakespeare bursts onto the stage and announces that the show must not go on, but is KO'd by witch magic. Will Kemp improvises an excellent triple-meaning couplet: if "Will" refers to Shakespeare, it's him dismissing the warning as drunken ramblings. If "Will" refers to Kemp, it's a mock-apology for his own silliness (emphasized with a goofy caper). If "Will" is the Elizabethan-era slang for penis, it's a joke about alcohol-induced sexual impotence. Meanwhile, the Doctor and Martha find the youngest witch and try the naming again, but it turns out It Only Works Once. The witch tries it on Martha, but Martha's anachronism saves her from permanent harm. The Doctor, of course, has no discernible name. So the witch vamps him instead, gets a lock of his hair and stops his heart; one of them, anyway. Martha wakes up, improvises some first aid to get the afflicted heart going, and they're off to back up Shakespeare.

But they're too late! At the play's end, two noblemen recite an odd invocation that allows the whole Carrionite race, sealed off long ago, to show up in the Globe. Shakespeare, the Doctor and Martha form an impromptu trio: Shakespeare improvises a counter-spell, flanked by the Doctor providing the right numbers and Martha providing "Expelliarmus!" The spell imprisons the witches in their own crystal ball and also destroys all copies of the play.

In the end, Martha is revealed to be the Dark Lady, the unknown (and speculated to be imaginary) African woman to whom Shakespeare wrote several sonnets (not including, however, the Shall I compare thee to a summer's day? one, which he starts to recite to her). Oh, and he casually figures out that the Doctor is otherworldly and Martha is from the future. They are interrupted, though, by Queen Elizabeth I, who showed up to congratulate Shakespeare on his excellent special effects. A Whole Lot of Running ensues when it turns out that Elizabeth considers the Doctor her "sworn enemy" for something he hasn't done yet.