Literature / Back to the Future 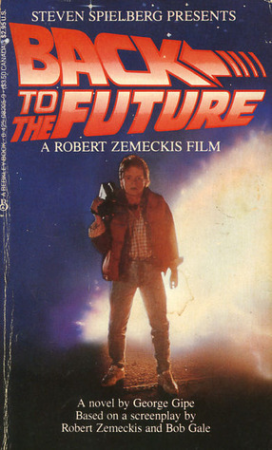 Back to the Future: The Novelization Of The Feature Film is a novelization of the first movie written by one George Gipe. It was written before the movie's script was finalized, so we get a whole lot of extraneous detail, weird characterizations, and Deleted Scenes. But this isn't just your average Early Draft Tie-In novelization - oh, no. It's much stranger than that. There's bizarre conversations and general WTF-ery galore. Just when you think the book can't get any weirder, it does. It really does. Obviously, the book is of major interest to any BTTF fan. The author also novelized several other movies, co-wrote two film comedies with Carl Reiner and Steve Martin, and then passed away after being stung by a bee the year after this book came out.

B to the F: The Novelization of the Feature Film is a Tumblr liveblog tearing the book apart.