Literature / B to the F: The Novelization of the Feature Film 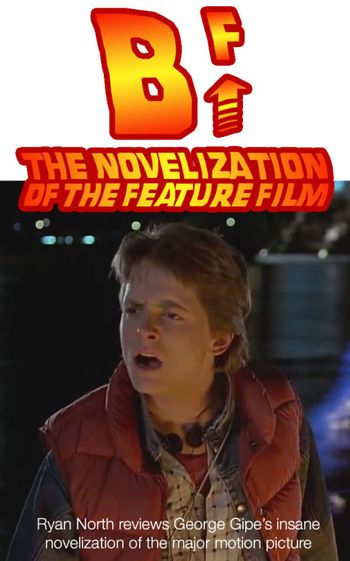 A good visual representation of the reader during this.
Stay tuned for surprises Marty McFly never could have imagined!

Everyone knows the story of Back to the Future: teenager Marty McFly goes back in time from 1985 to 1955, interrupts his parents' first meeting, jeopardizes his existence in the process, so on, so forth, and what have you.

Well... actually, not everyone knows that story, or at least the finalized version. One particular person, George Gipenote who novelized several other movies and co-wrote two film comedies with Carl Reiner and Steve Martin, was more familiar with the draft he was given in 1984 so he could write the novelization.

Yes. He wrote the novelization before the movie was finalized.

And then he was stung to death by bees soon after submitting his manuscript.

Again, yes.note Gipe was allergic to bees; he got stung by one in Glendale, California and died from the allergic reaction. He was DOA at the hospital.

And, for a while, that was it: the novelization was published, and not much attention was directed towards it since.

At least, until January 30, 2012, when one particular man decided to create a Tumblr blog dedicated to recapping / reviewing the novelization. That man... was Ryan North.

(which can be read in chronological order here

If you thought you knew Back to the Future before, hold on to your hats...