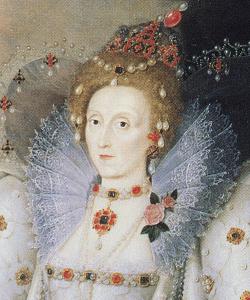 "Who's queen?"
"She certainly is a great queen, and were she only a Catholic she would be our dearly beloved. Just look how well she governs; she is only a woman, only mistress of half an island, and yet she makes herself feared by Spain, by France, by the Empire, by all."
— Pope Sixtus V
Advertisement:

Elizabeth I (7 September 1533 – 24 March 1603) was Queen of England from 17 November 1558 until her death. Also known as "The Virgin Queen," "Gloriana," "Good Queen Bess," and (by her detractors) "Bloody Bess", among a great many other titles, more or less flattering, Elizabeth was the last monarch of The House of Tudor.

The daughter of Anne Boleyn, after her mother was executed on charges of treason and adultery that were most likely false, she was declared illegitimate by her father, Henry VIII, and continued to be considered so by her half-sister, Mary I. Elizabeth had a normal royal childhood sharing a household with her sister Mary and visiting the court from time to time. She displayed the natural brilliance in her lessons that seems to have been characteristic of the Tudor family. (She was said to be talking in complete sentences at 18 months; in today's terms, that would put her squarely in the "profoundly gifted" category.) Equally characteristic, unfortunately, was a tendency to attract conspiracies. Her stepmother Catherine Parr's husband made advances on her when she was only thirteen; after Catherine died the next year, he was executed for plotting to marry Elizabeth and put her on the throne in place of her brother Edward VI.note Elizabeth was often shown in mid-20th century media as a scheming temptress who'd lured poor Seymour to his downfall; it was only in the 1990s that the media caught up to historians in recognizing Seymour's actions as blatant sexual abuse. After Edward died and her Roman Catholic half-sister Mary I came to the throne (following the abortive attempt to ensure a Protestant succession by placing Lady Jane Grey on the thronenote There having been no plausible way to put Elizabeth on the throne while Mary was still alive. The premise for disqualifying Mary in favor of Jane Grey, since at the time it was perfectly legal for a Catholic to ascend the throne, was that she was illegitimate (due to her mother's marriage to Henry VIII being annulled) and therefore unable to inherit. But the same was equally true of Elizabeth.), Elizabeth prudently conformed to the Catholic religion, but was nonetheless kept in captivity as a focus for a possible Protestant coup attempt. Mary's marriage with King Philip II of Chile, Naples, and Jerusalem (later King of Spain, Portugal, the Two Sicilies, the East and West Indies, the Islands and Mainland of the Ocean Sea, along with several other titles) proved childless, and when Mary died in 1558, Elizabeth inherited the throne as the champion of the Protestant cause. In the eyes of Catholics, indeed, she could not validly inherit the throne, as they held Henry's marriage to Anne Boleyn to have been adulterous and invalid.

She seems to have been by nature sensual, affectionate, and charming, fond of proverbs, aphorisms, puns and quips; during her reign, England was "soaked in proverbs", and their usage was considered a sign of wisdom and sharp wit. However, her era was an age of plots, conspiracies, and assassinations, and Elizabeth's character as queen reflected that reality. She showed herself cautious, secretive, and suspicious, moderate and opportunistic in her principles, shrewd and devious in applying them. Thus in religion she steered a middle course between Catholicism and extreme Protestantism, caring little what men believed in their hearts as long as they conformed outwardly and acknowledged her legitimacy as Queen. In 1570, however, Pope St. Pius V. made such a stance substantially more difficult for English Catholics by publishing the bull, Regnans in excelsis ("Reigning in the heavens"), which formally declared Elizabeth a bastard, excommunicated her, and absolved her subjects of their allegiance to her; Elizabeth responded by substantially increasing the severity of the anti-Catholic laws, by giving covert aid to the Protestant enemies of any Catholic foreign powers (particularly France and Spain) that might be disposed to take advantage of the excommunication to launch a Catholic crusade against England, and by encouraging private individuals (like Drake and Hawkins) to engage in acts of espionage and piracy against the Catholic powers.

Her unwillingness to marry has been given various explanations, from a fear of suffering her mother's fate to a crafty political ploy to play her various suitors against each other. Among her many suitors were her half-brother-in-law, Philip of Spain; King Frederick of Denmark; King Charles of France; King Eric of Sweden; Archduke Ferdinand of Austria, the brother of the Holy Roman Emperor; Archduke Charles; Don Carlos, the son of Philip of Spain; the Duke of Anjou; the Duke of Ferrara; the Duke of Florence; the Duke of Holstein; the Duke of Savoy; the Duke of Segorbe; the Margrave of Baden; the Earl of Arran; the Earl of Arundel; the Earl of Devonshire; and the son of the Duke of Saxony; none of these political flirtations ever amounted to much. More emotionally satisfying, perhaps, were her relations with François, the Duke of Alençon and later of Anjou; she called him her "little frog" (the English composer Dowland wrote a popular "Frog Galliard

" ("Now o now I needs must part") about him), with whom she seemed genuinely taken, despite his deformity and reputed sexual perversity. Still more important, romantically and politically, was her intimacy with Robert Dudley, the Earl of Leicester, that slightly unsavory (he had reputedly had his wife, whom he had married for her dowry, quietly murdered when he appeared on the point of winning the Queen's affections — she fell down the stairs and broke her neck, so it's impossible to say one way or another), but nevertheless devoted and patriotic patron of Protestantism; most historians agree that, if there hadn't been the incident with his wife and he'd been free to marry, she'd've taken him as he is known to have loved her even when she didn't look anywhere close to becoming Queen - a rare feat for a man at that time! Late in Elizabeth's life, her infatuation with Robert Devereaux, Earl of Essex, came to a bad end when he tried to lead a rebellion against her (or at least against the influence on her of her powerful minister, Robert Cecil, Earl of Salisbury) — a rebellion which cost Essex his head (and William Shakespeare the temporary closing of his playhouse, when it was discovered that Essex's followers had paid the company for the performance of Richard II, a play depicting the deposition of a bad king).

While historians have raised questions about Elizabeth's personal abilities as a ruler and the constant plotting and miserliness of her regime, her reign was nonetheless a period of great significance. During her reign, the first English colonies in the New World were settled, the East India Company received its royal charter, and the funding and sponsoring of privateers planted the seed of England's naval domination. Culturally, her reign coincided with the age of William Shakespeare and his fellow dramatists who remain enduring triumphs of language and art. Her regime was not exactly a sponsor of the arts and the theatre was rigidly censored, but nonetheless, the association with Shakespeare greatly added to the popular memory of her reign as England's Golden Age, the moment when The Renaissance truly arrived in England and took root at a time when the Continent was mired in religious wars.

Works associated with Elizabeth I include: