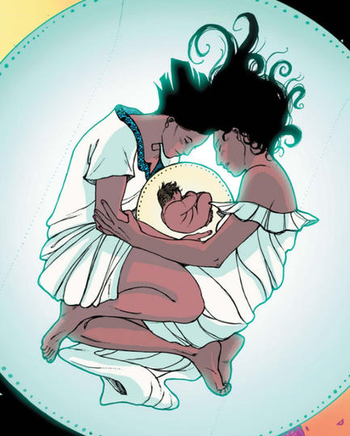 "I am Kronar, son of man. For a hundred generations, my fathers have kept the bloodline pure. Free from woman's taint."
— Kronar, Son of Kronar, Oglaf
Advertisement:

It's not unusual to see a same-sex couple with a child. In the real world this happens through adoption, in-vitro fertilization, or children of a prior relationship viewing the other same-sex partner as a stepparent even if they're not (or cannot be) legally married.

But what about the child who is conceived from two genetic parents of the same sex?

Assuming there's no transgender people involved, this trope turns a blind eye to the exact method of birth (People Jars, womb, etc.) and sticks to naming any kid who draws their genetic heritage from two individuals of the same sex, regardless of how they were incubated/born, and whether this was the result of magic, genderbending, shapeshifting, DNA splicing, or bizarre alien/human biology.

Closely related to Has Two Mommies, although one does not require the other. Compare and contrast Truly Single Parent. Contrast Face Full of Alien Wing-Wong. Can result in Mister Seahorse (even though Pregnancy Does Not Work That Way). Often a necessity in a One-Gender Race. Not to be confused with Your Tomcat Is Pregnant.