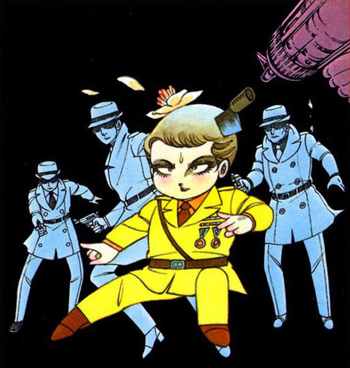 Once, there was an island where it was always spring... An island somewhere in the South Seas, with green forests and wide lakes. And mountains, let us not forget the mountains. Tall mountains with deep roots, filled with one of mankind's most precious treasures: diamonds. The name of this island is Malynera, and its king is only a child.

Patalliro VIII, king of Malynera, is 10 years old. From the day he was born, everyone knew he was... unusual. He is a hyper boy, with flashes of genius, moments of thoughtless cruelty, and the ability to make a bad pun out of anything. Smart, but only a child and so he often does very stupid things.

He lives in a world very similar to our own, but where the bizarre is commonplace. He manages to get into all kinds of trouble, from international terrorists to space aliens to accidental time travel. His first challenge as king is to stay alive when a group called the International Diamond Syndicate decides that it wants control of the Malynera diamond mines. This is how he meets Major Jack Bancoran, who was assigned to be his bodyguard during a trip to Britain. It's also how they meet Maraich, who was one of the assassins sent by the IDS.

Patalliro is almost always accompanied by his army of Tamanegi ("Onions", so called because of their onion-shaped wigs). The Tamanegi all wear identical masks, wigs and glasses, and are known only by numbers. They are Patalliro's protectors, but protect the world from him just as much as they protect him from the world.

The manga started in 1978 is still going, currently has 98 volumes and has been adapted into various media: