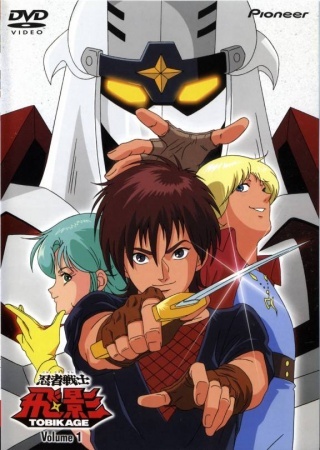 In 2200 AD, at a time when Mars and the Moon have been colonized. The story of Joe Maya, a teenager on Mars dreaming of returning to Earth. One day, an Alien Space craft crash lands on Mars, and he accidentally activates one of the ship's mecha, which combines with the mysterious Tobikage, a Ninja Robot.

The original series is legally available on

Anime Sols, where you can also pledge money to keep the series afloat in the United States and Canada in exchange for physical goods such as stickers, posters and DVD box sets. However, it is currently defunct. In 2020, Discotek announced that they would be releasing the entire series on Blu-Ray alongside at least the first 20 episodes of the Ninja Robots English dub. They've made calls via social media for anyone who can help them find the rest of the dubbed episodes.