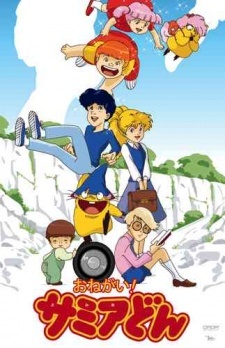 Onegai! Samia-don! ("Please, Mr. Psammead!") is an animated adaptation of Edith Nesbit's novel Five Children and It, set in the rural England of The '80s. It begins with the Turner siblings (the teenaged Simon/Sil, the pre-teens Robert and Jane, and the baby Babe) finding an odd creature named the Psammead that can grant them wishes lasting for a whole day; from then on the siblings and their neighbor, a teen girl named Anne Hopkins, start living an odd life full of adventures granted by the Psammead's magic...

More than a little reminiscent of Doraemon, the series in itself had 78 episodes, was produced by TMS Entertainment (then known as Tokyo Movie), and ran from 1985 to 1986 in NHK Channel. It was broadcasted in several countries (almost all of Latin-America, Italy, France, Russia and the French part of Canada, among others), but not in the USA, with only a few fansubbed episodes available in English.