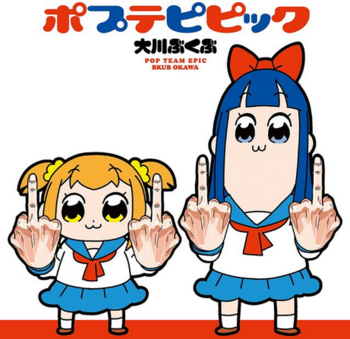 Popuko and Pipimi, setting the mood.
"There is no darkness but ignorance"
— William Shakespeare, in Twelfth Night, the official website's substitute for a premise
Advertisement:

Pop Team Epic (ポプテピピックnote Some chapters (7 times total) mislabel the series' English title as Pop Teen Epic. Also, some Anglophone fans like to write it Poptepipic) is a comedy yonkoma web comic created by Bkub Okawa (otherwise known for his Touhou Project doujins) and published by Takeshobo on their free Manga Life Win

it for an official English translation in October 2018.

It's best described as a Widget Series with negligible continuity and humor that often relies on Non Sequiturs or Japanese pop culture references, heavily mocking and parodying other manga, anime, and video games, as well as a heaping helping of Self-Deprecation. The only recurring characters are a pair of schoolgirls named Popuko, the blond-haired shorter one with a visibly drawn nose and who is quicker to anger, and Pipimi, the dark-haired taller one who is generally calmer. Other details tend to vary between comic strips. There's really nothing like it out there.

In April 2017, an anime adaptation

was finally announced for release later that year in October 2017, only to be delayed to January 2018 due to production difficulties. The series takes on a Sketch Comedy format, with different segments' animation handled by different animation studios. The bulk of the series is done by Kamikaze Douga, who handles segments with 3D computer animation, and Space Neko Company, who handles the 2D animated segments as well as most of the "POP TEAM STORY" segments that feature original stories with gags inspired by the manga. Other recurring animation directors include:

Each episode is a Quarter Hour Short... sort of. Once the episode ends, an encore presentation is immediately broadcast afterwards but with a completely different voice cast for Popuko and Pipimi, with one pair generally being two women and the other pair two men.note The first episode is an exception as the 2nd half still had a man as Popuko paired with a woman for Pipimi. In each pair, the two have some relationship between them, generally as a pairing in a previous show or simply a well-publicized friendship. Sometimes the dialog and jokes are different between the two versions of the episode, either due to ad libbing on the actors' parts or jokes have been rewritten to fit in with a particular actor's prior roles, as well as other minor roles being recast for humorous effect. By the time the series ended in late March 2018, after 12 episodes, Popuko and Pipimi had been voiced by 24 different people each, not counting the "Bob Epic Team" and "JAPON MiGNON" segments which each have different recurring voice actors and the two different sets of vocalists for the series' Insert Songs and ending theme songs.note And the nonsensical joke casting of two actors who star in a different Kamikaze Douga production. And that's just the original Japanese broadcast version. Funimation and Sentai Filmworks both picked up the series for English audiences, producing two different translated scripts distributed to their own simulcast services as well as Crunchyroll and others. Toonami announced that they would begin airing the anime on June 30, 2018.

It is currently up in the air as to whether or not the anime will get a second season. A TV special featuring two new episodesnote Which had different casts per episode half which was further different based on which of 4 websites the episodes were streamed on, meaning an additional 16 people voiced each character on top of two new pairs of singing voices and a new voice for Pipimi in "JAPON MiGNON". was broadcast on April 1, 2019. But at least we know Hoshiiro Girldrop is coming back for us to fall in love with again......

...Until October 2021, the anime's Remix rerun brought up so much changes that the staff literally announced that they won't rest on a simple rerun

. Truly a bunch of trolls. After the rerun ended, they announced that a 2nd season is indeed coming in 2022

Popuko: So I instead said I wanted to be a Troper. Hey! Are you listening?!
Pipimi: Sorry, I was thinking about Hellshake Yano.

Welcome to the Pop Team Epic Ridiculous Fortunes! Please screenshot this video or pause it to get your fortune. Translations are in the link below: https://brownricecookies.wordpress.com/2018/01/13/pop-team-epic-episode-2-fortunes/

Welcome to the Pop Team Epic Ridiculous Fortunes! Please screenshot this video or pause it to get your fortune. Translations are in the link below: https://brownricecookies.wordpress.com/2018/01/13/pop-team-epic-episode-2-fortunes/