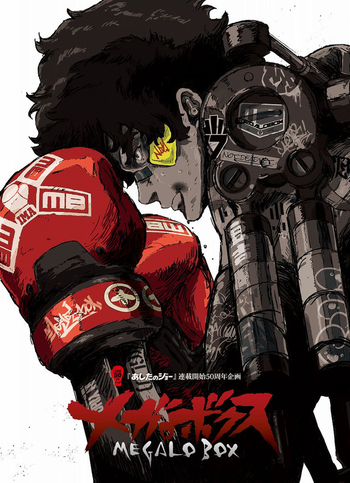 "I want to believe... Believe that my faith in myself is real."
"To be quiet, and do as you're told, that's the cowardly choice. To stay down... or fight back... Which am I doing right now? To stay down here... Or fight my way out... I still haven't done either, yet."
Advertisement:

In the distant future, boxers fight matches while wearing powered exoskeletons on their arms known as Gears, and the sport is now known as Megalo Box. The Shirato Corporation, the company that invented Gear, announces that to prove the potential of Gear technology, they will host a tournament called Megalonia: a worldwide competition where anyone can enter and win untold riches. A young outlaw only known as Junk Dog, who is used to fighting in underground boxing matches, is not interested in fighting in such a tournament... but at the same time, he wishes to fight a real battle instead of purposely losing the fixed matches.

Then everything changes for Junk Dog when he meets Yuri, the Megalo Box champion.

Megalo Box is an anime series released in 2018 as part of the 50th year celebration of Tomorrow's Joe, as an Alternate Universe retelling, similar to the likes of DEVILMAN crybaby. It was produced by TMS Entertainment, who animated the second season of Tomorrow's Joe. It's available for streaming on Crunchyroll here

A second season of the show called Nomad begun airing in April 2021. It is set following a seven-year Time Skip, during which things have changed drastically from where we left off in the first season. Funimation licensed Nomad, and the dub is available on Funimation's streaming service, Funimation Now.

Has no relation to Medaka Box.