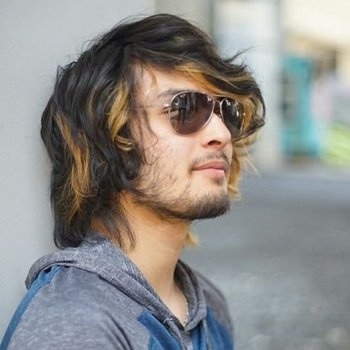 Joey Bizinger, AKA The Anime Man, born September 28, 1994, is a Japanese-Australian Internet personality active on YouTube, where he talks about anime and manga, mostly in the style of vlogs. In the beginning of his career he would mostly do Lets Plays. He is also one of the most-subscribed anime YouTubers with almost 3.25 million subscribers as of July 2022.
Advertisement:

He first began to upload videos in 2013, giving his thoughts on anime-related subjects, doing vlogs and music covers, the latter of which he ceased to do. Later on, he also began to do Let's Plays, starting off with his then relatively popular Corpse Party series. From 2016 onwards, most of his content is vlogs on anime-related topics and the occasional #AnswerMeSenpai or reaction to certain comments.

Joey's channel has a number of themed segments, including:

In mid-2020, he, Gigguk, and CDawgVA began a podcast called Trash Taste, where they discuss general topics about anime, manga, and life in Japan.

, where he discusses numerous subjects related to anime and manga, on top of more random stuff, and the Ikurru

topic where he hosts the music he's released as Ikurru.

Games The Anime Man has played

The Anime Man provides examples of:

Tropes discussed in his videos: