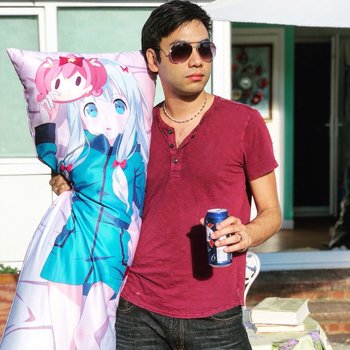 "Anime is trash and so am I."
"Welcome to the Anime Zone. I've hoped you've enjoyed the constructive, fast-paced, sarcastic videos that are my anime reviews, and for the last fucking time, go watch Baccano! now."
— 1000 Subscriber Special
Advertisement:

Garnt Maneetapho, a.k.a. Gigguk, born May 31, 1990, is a British-Thai, fast-talking, self-made anime reviewer who originated on YouTube and is the sole founder of The Anime Zone

, co-founder of The PodTaku Podcast

Born in Brighton, England to Thai immigrants, he began his reviewing career in 2008 as a way to procrastinate from math homework. It all started with a review of Bleach under his Thai nickname, Gigguk. Since then, he has changed his style from leisurely enjoyment to a more analytical and comedic approach. His final grade is based on a 0 to 10 rating system, designating each title with a single integer. He is open to reviewing any title from any genre, despite his aversion to high school and moe anime.

2012 marked the beginning of his tenure as a permanent panelist on The PodTaku Podcast until its folding in January 2016. He was joined by fellow reviewers Arkada, Holden

. He followed it up two months later with the release of EvAbridged, a highly satirical parody of Rebuild of Evangelion, in which he voices the role of Fuyutsuki. On September 25, 2013, he and the rest of PodTaku launched J-Taku, a separate podcast of singular topics devoted to anime, which was developed with the help of several other reviewers note  Their names are ZeroMan101

On May 5, 2016, Gigguk announced his official return to YouTube after a series of consistent uploads, with his intent to substantially grow the channel by the end of the year. He reached over 500k subscribers that year in December, and hit one million subscribers on December 30th in 2017. As of July 2020, he is one of the most subscribed Anitubers with 2.39 million subscribers.

After his comeback, he moved away from his previous reviewing format over time, and eventually stopped using the name "The Anime Zone".

2020 sees the debut of a collaborative podcast with The Anime Man and CDawgVA, Trash Taste. The series focuses on their mutual love of anime and manga, as well as their unique takes and observations on Japanese society.

Shout-Outs can be found here. To see a full list of material created by Gigguk, see here.

Tropes that Gigguk has discussed in his videos:

While Gigguk at first dismisses Sweetness & Lightning, being not too fond of cute, moe anime, he is immediately won over and entranced by Tsumugi's smile.

While Gigguk at first dismisses Sweetness & Lightning, being not too fond of cute, moe anime, he is immediately won over and entranced by Tsumugi's smile.