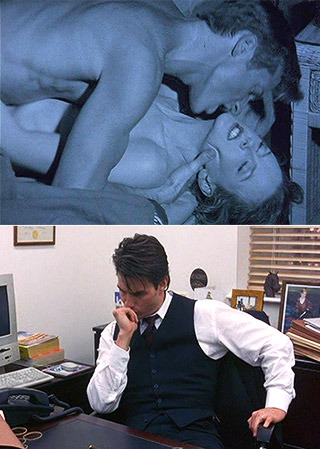 Something's been bugging me... Did I leave the stove on?
Batman: Jim, what's wrong?
Jim: Oh, it's Barb. You know she's sleeping with someone else, and the worse part I can't blame her. I mean a woman can only go so long watching the dead eyes of her lover thrust a top of her before she looks for something new.
Batman: So you didn't call me about the break-in at Wayne Enterprises?
Jim: What? No! This is about the breakdown of my marriage!
— Harley Quinn (2019)
Advertisement:

In everyday use, it is almost always considered a pejorative reference to men whose wives have extramarital affairs without his consent, but it is not unheard of for it to be used for men who willingly allow their wives to sleep with other people.

However, in fetish circles, "Cuckolding" is not limited to cheating, need not involve an actual married couple, and (believe it or not) need not be negative. The actual application of the fetish varies from situation to situation, but it typically involves a man who has strong romantic feelings for a woman, but her finding greater sexual and/or romantic satisfaction with someone else.

When portrayed as fetish, focus on the sensual acts is played up, but this variation is very polarizing, as almost everyone outside of the niche audience shows utter contempt for it. For male opponents, the idea that a woman they love could betray them is extremely painful. For female opponents, the idea that they are just someone's "property", to either be pimped out or conquered, is disgusting. Harsher interpretations often accuse any man who fails to satisfy his woman, or fails to protect her fidelity, of being no real man, and any woman who dares have her body used by anyone except her husband to be a filthy, debased whore, even if she was forced.

Some theories have touted the fear of Cuckoldry as the Greater-Scope Villain that controls every single form of misogyny. Women can carry and give birth to their children, and men can't; thus, before the Daddy DNA Test was invented (which means, for more than 99.9% of humankind's existence), the only way to be certain of paternity was to avoid cuckoldry at all costs. This is why cuckoldry is seen as the ultimate insult for a man and the ultimate triumph for his nemesis. And thus, women are reduced to objects valued solely for their domesticity, virginity, and purity. Many societies saw this as a fair trade-off: in their view, the woman's certainty over the maternity of her children is a privilege and power she holds over men, so men are "entitled" to other forms of power to compensate.