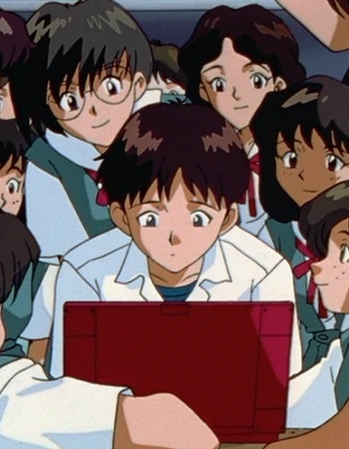 And his main love interests aren't even in the picture!
MC: Mitsunari, you're a real ladykiller, huh?
Mitsunari: K-kill ladies? I would never do such a thing! I mean, I realize that we live in a period of war, but I firmly believe that women and children must be protected—
MC: Wait, wait, that's not what I'm talking about! I meant you're really popular with women.
Mitsunari: Haha, you're funny, MC. Women only like incredible men like Lord Hideyoshi. Even I know that.
MC: [thinking] Oh, wow. He really is as dense as Ieyasu says. He just doesn't get what I'm saying.
— Ikemen Sengoku
Advertisement:

A character who is his own worst enemy when it comes to love. In fact, he's pretty much his only enemy in this arena. Wherever he goes, it seems that for some reason he attracts some romantic attention and, in theory, there is no reason why he couldn't go on to be The Casanova with a new person every night. The only problem is he is so unfamiliar with the dating scene he doesn't realize the girl who is hovering around him, batting her eyes, trying every excuse to make physical contact with him and suggesting he go back to her place qualifies as flirting and not simply being friendly.

Usually deliberately designed to be Mr. Fanservice. This character also tends to be Endearingly Dorky. Compare Accidental Pornomancer, Celibate Hero (who avoids romantic involvement that might interfere with The Cause) and Chaste Hero (who's too young, dumb or asexual to even be interested). See also Single-Target Sexuality, in which a character remains uninterested in potential love interests because they're only interested in one, Oblivious to Love, where there is one specific person who is clearly head-over-heels for them but they don't realize it, Chick Magnet (of course), Unwanted Harem and Hollywood Dateless. Remember that this character does not have to be male, although it usually is.

Often invokes trouble for this character. He, though it can be she, loses the romance plot which draws the shippers. On the other hand, if the character wises up, they often do so by losing what gave them the magnet. Again, lose. This character fails at romance, though not intentionally, like a Chaste Hero or Celibate Hero.

Mary Sues are known to attract the affections of everybody but is completely oblivious to it.

Mary Sues are known to attract the affections of everybody but is completely oblivious to it.