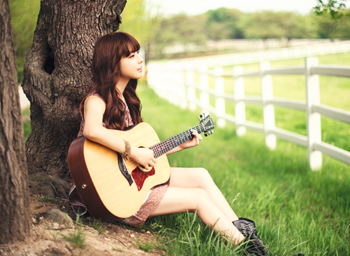 She made her indie debut in Japan in 2011 followed by her major debut in 2012, before finally making her Korean debut in 2012. B-side "Babo", a duet by her and labelmate CN Blue's Jung Yonghwa (who also produced the song), was pre-released along with a music video starring the two of them, and then the music video for the official promotional track "Illa Illa" was released on June 7th along with her debut mini-album My First June. She won a Rookie award that year and a Rising Star award the next year.

Besides Yonghwa, she's also collaborated with quite a few others. One of them is CN Blue's Lee Jonghyun where they formed an official subunit called Romantic J, and they released the song "Love Falls" in December 2013.

She is best known for her acoustic/pop rock songs, always playing and seen with her guitar, her songwriting skills and her sweet voice. She is considered another impressive artist under FNC, the company known for training bands and songwriters, and unofficially known as their beloved "princess".