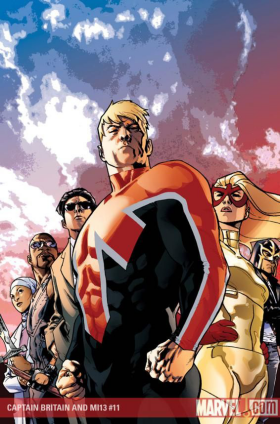 Captain Britain and MI13 is a Marvel Comics series set in the Britain of the Marvel Universe, created as a successor to New Excalibur and to Paul Cornell's Wisdom: Rudiments of Wisdom miniseries. It was written by Paul Cornell, and ran for 15 issues (July, 2008-September, 2009).

The first story arc was a tie-in with the Secret Invasion event. In the first issue, a young Pakistani-British doctor, Faiza Hussain, gets zapped by an alien machine while tending to the casualties of a Skrull attack, gains superpowers, and becomes one of the series' central characters.