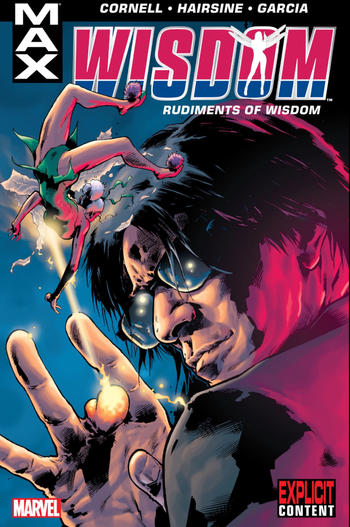 Wisdom (later collected with the subtitle Rudiments of Wisdom) is a comic book limited series published by the MAX imprint of Marvel Comics, starring the titular Pete Wisdom, a British hero originally appearing in the X-Men comics. The series is written by Paul Cornell and illustrated by Trevor Hairsine and Manuel Garcia.

These days, Pete Wisdom works for MI13, the UK's latest attempt to set up an agency that specifically deals with superhumans and weird happenings. Their working relationship with more established agencies, such as MI5 and MI6, isn’t always the best.

And apart from Pete himself, they don't have the most prestigious team of operatives. There's John the Skrull, who decided he liked the Earth (and impersonating the Beatles) enough to disobey his orders to invade it. There's Captain Midlands, an aging WWII super-soldier who's not a fan of the 21st century. There’s Tink, a rebellious fairy who's abandoned her people. And there’s new recruit Maureen Raven, who's not technically a telepath.

But there’s no shortage of cases for them to work on. Murders and kidnappings by the fair folk of Otherworld. A village where something strange is creeping into people's dreams. A gangster who used to be a dragon. And then, lurking in the distance behind all of that, there's the other thing. The force from another reality that's looking for a way into this one, and already has its eye on Wisdom's MI13 team…

The first issue was released 8 November 2006.