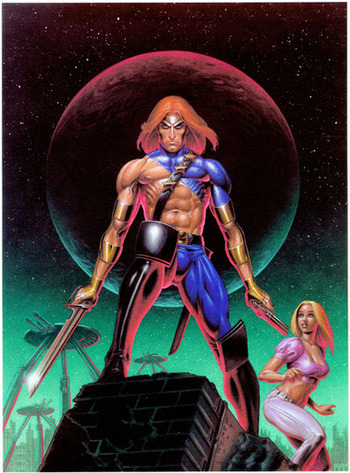 Killraven is a Marvel Comics character created by Roy Thomas, Neal Adams, and Gerry Conway. He debuted in Amazing Adventures #18 (May 1973) and has appeared in multiple alternate realities since then.

In the future of Earth-691, Earth was invaded by the Martians from War of the Worlds in 2001, who successfully conquered the planet and subjugated humanity. Post-conquest, men are used only for breeding or gladiatorial combat, while women are used solely to produce children for the Martians to eat. After escaping from the games, former gladiator Jonathan Raven (dubbed "Killraven") joins the freedom fighters in order to search for his lost brother Joshua.