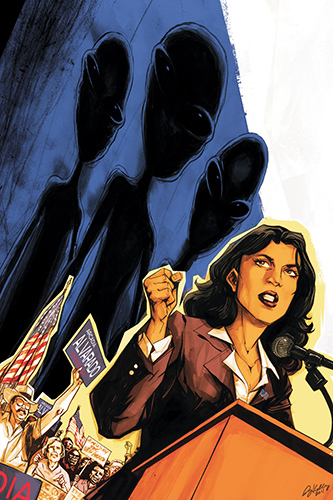 Professor Kidd: Governor, you're a politician. You're used to dealing with the art of the possible. This is the opposite. Some sort of faux therapist, a... new age guru you brought in, like some politicians do — they'd have reassuringly solid answers for you concerning the great beyond. But I deal in mythology. And this is what a mythology does, it bridges the gap between truth and lies. It creates a disturbing liminal zone. A grey area. And in that space, all of a civilisation's weak spots and shortcomings and hypocrisies are made visible. New Mexico is kind of haunted by this myth. As I hope I'm about to show you. We're in saucer country now.
Advertisement:

Saucer Country is a UFO mythology comicbook series written by Paul Cornell and drawn by Ryan Kelly, published by Vertigo Comics in 2012. The series is about a US presidential candidate, Governor Arcadia Alvarado, who has come to believe that she may have been abducted by aliens. It has been described as a mix of The West Wing and The X-Files.

In 2013, Vertigo Comics cancelled the book at issue 14 due to low sales. However, IDW Publishing picked up the rights to the series and revived it with both Cornell and Kelly aboard, and with a new title: Saucer State.